Mapping extended entity-relationship (EER) diagrams to relations always results in a normalized database, yet we must still learn about normalization. For one, the databases we build will likely outlive the EER diagrams from whence they came, so we should know how to continue to evolve them in a normalized fashion.

Additionally, we never know what we might find when we inherit a database: it may be beautifully normalized and appear designed by experts, or it may not be normalized and look like idiots built it. Either way, we have to know how to navigate the database and understand that there may be situations in which normalization is relaxed in the face of other competing requirements, such as performance.

What it's all About 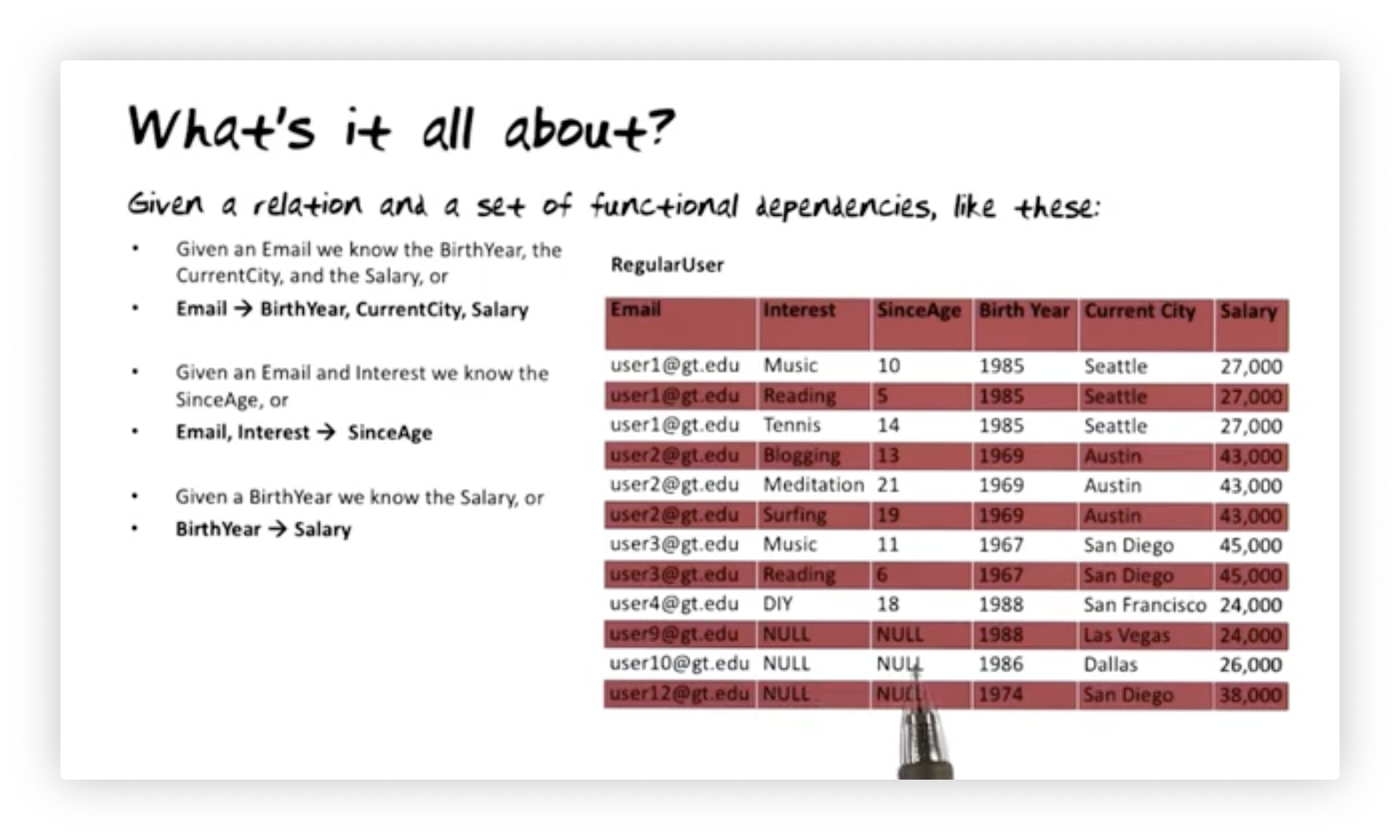 Here are the rules we must obey when normalizing a relation:

We might lay out the regular user data in the following nonrelational, non first normal form data structure: 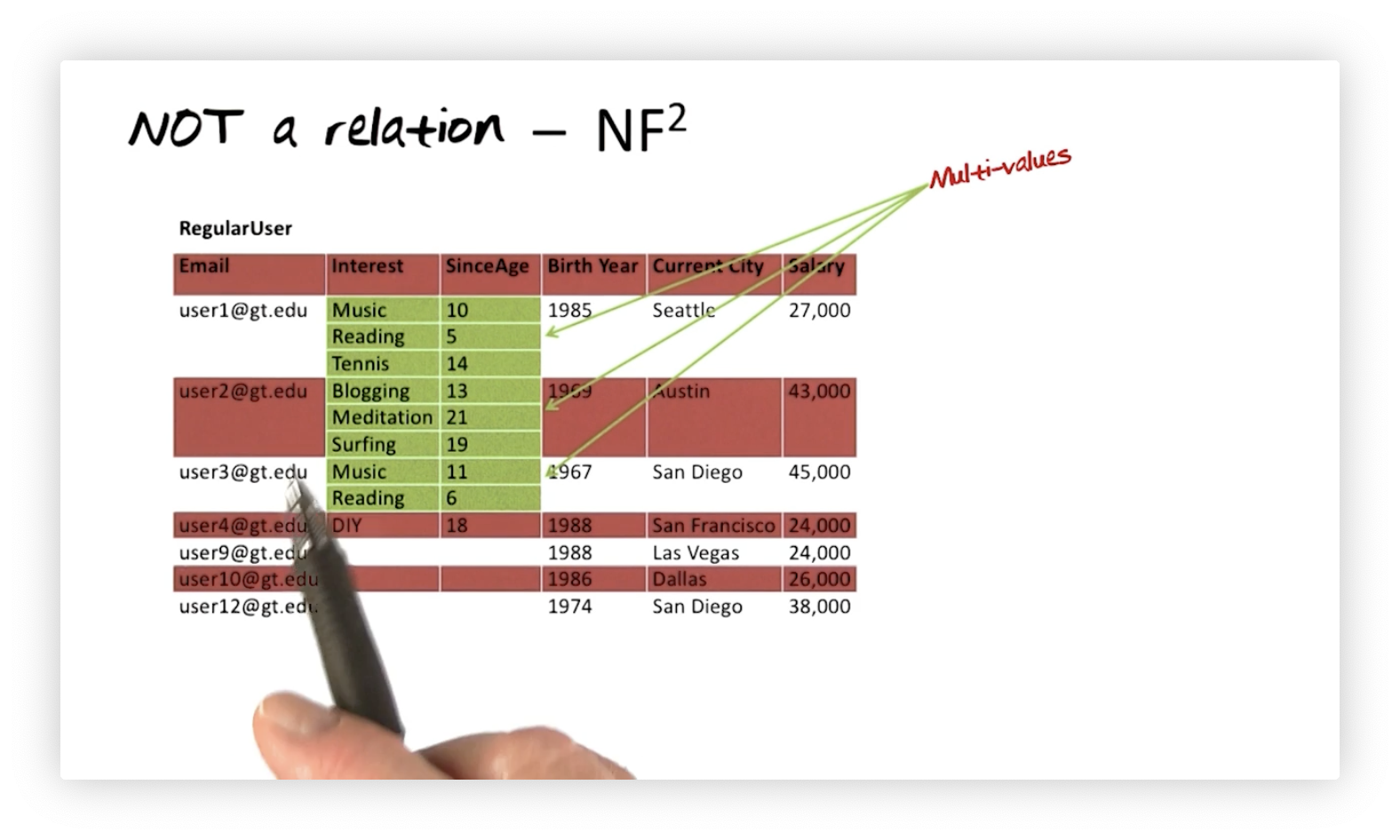 In this data structure, each user row contains single-valued attributes for email, birth year, current city, and salary. Additionally, each user may have multiple values for Interest and SinceAge. For example, user one has been interested in music since age ten, reading since age five, and tennis since age fourteen.

If we recall the definition of a relation, we might remember that we pull values for attributes from sets of atomic values. Certainly, (Music, Reading, Tennis) and (10, 5, 14) are not atomic values. How might we turn this non first normal data structure into a relation?

An obvious solution is to repeat information. For example, instead of having one row with two three-valued attributes for user one, we can create three rows. We have to repeat the user's email, birth year, current city, and salary three times - once for each row - but we do end up with a relation.

Let's convert the non first normal form data structure into a relation. As we said, we will add a row per value in the multi-valued attributes and repeat the single-valued attributes in each row. Even though we repeat information - for example, user one's Email, Birth Year, Current City, and Salary three times - we now only have one Interest/SinceAge pair per row. 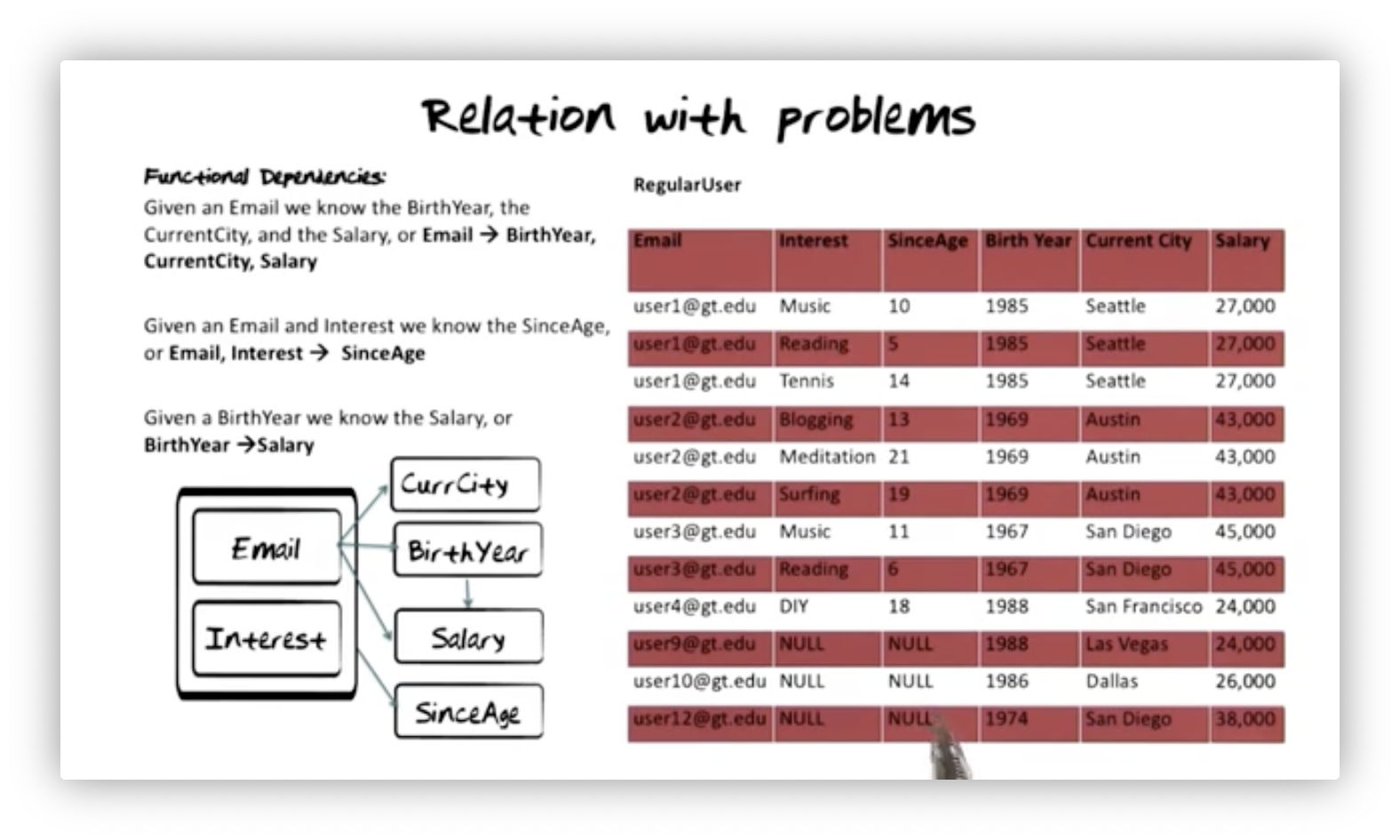 This data structure is now a relation, but it has many problems. Let's see what trouble we have created for ourselves.

The first problem this relation has is redundancy. Because we repeated user one's information - Email, Birth Year, Current City, and Salary - to avoid the multi-value problem, we now have redundant information, and redundancy potentially leads to inconsistency. 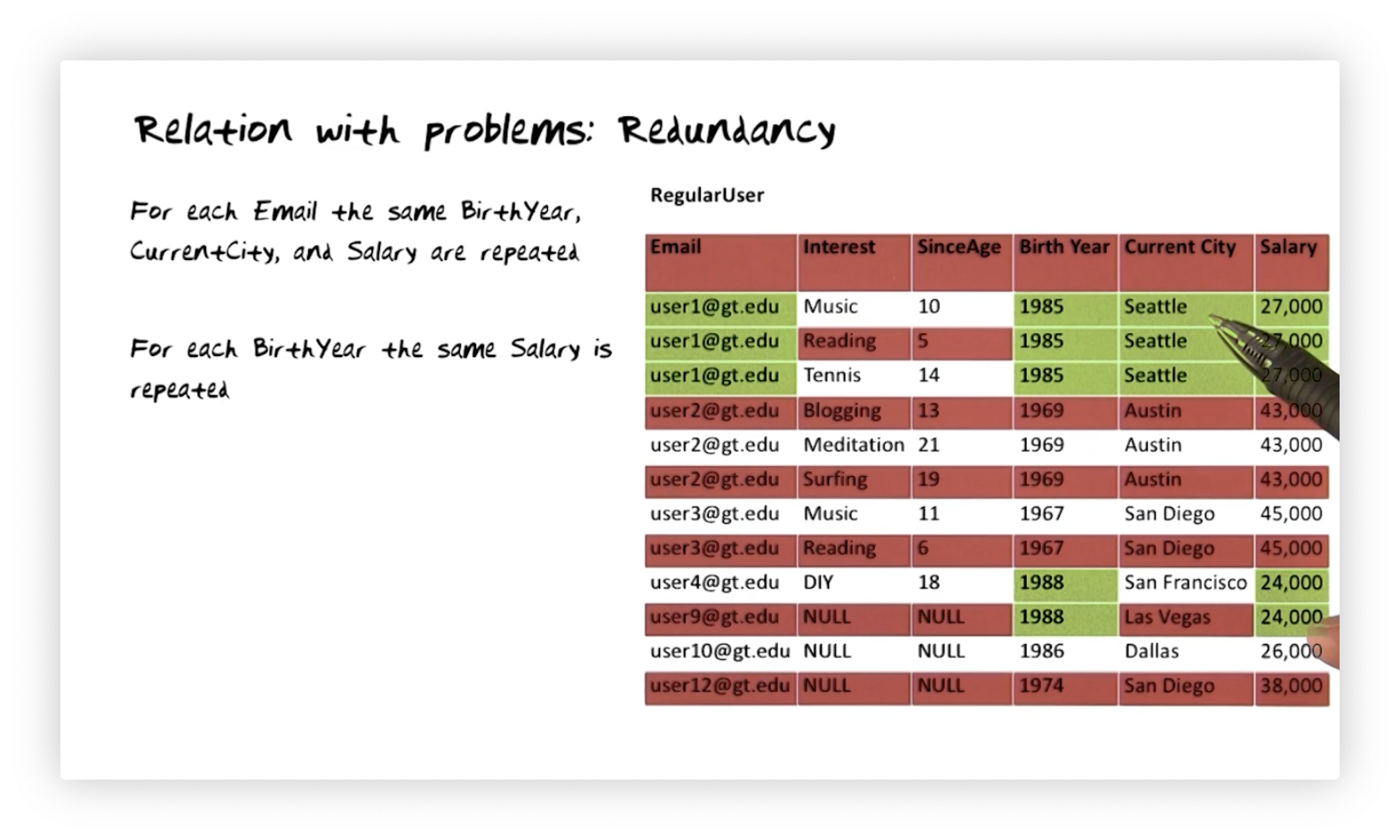 Suppose user one moves from Seattle to Atlanta. Furthermore, suppose that we update the Current City value for user one in row one from Seattle to Atlanta, but we somehow miss applying that update in rows two or three. Subsequent database users will be unable to discern user one's current city. This inconsistency, facilitated by redundancy, renders the database useless for queries about a user's current city.

Let's say we insert a new user, user nine, into the database with their corresponding birth year, current city, and salary information. If user nine doesn't have any interests, then we have to insert NULL values for Interest and SinceAge. 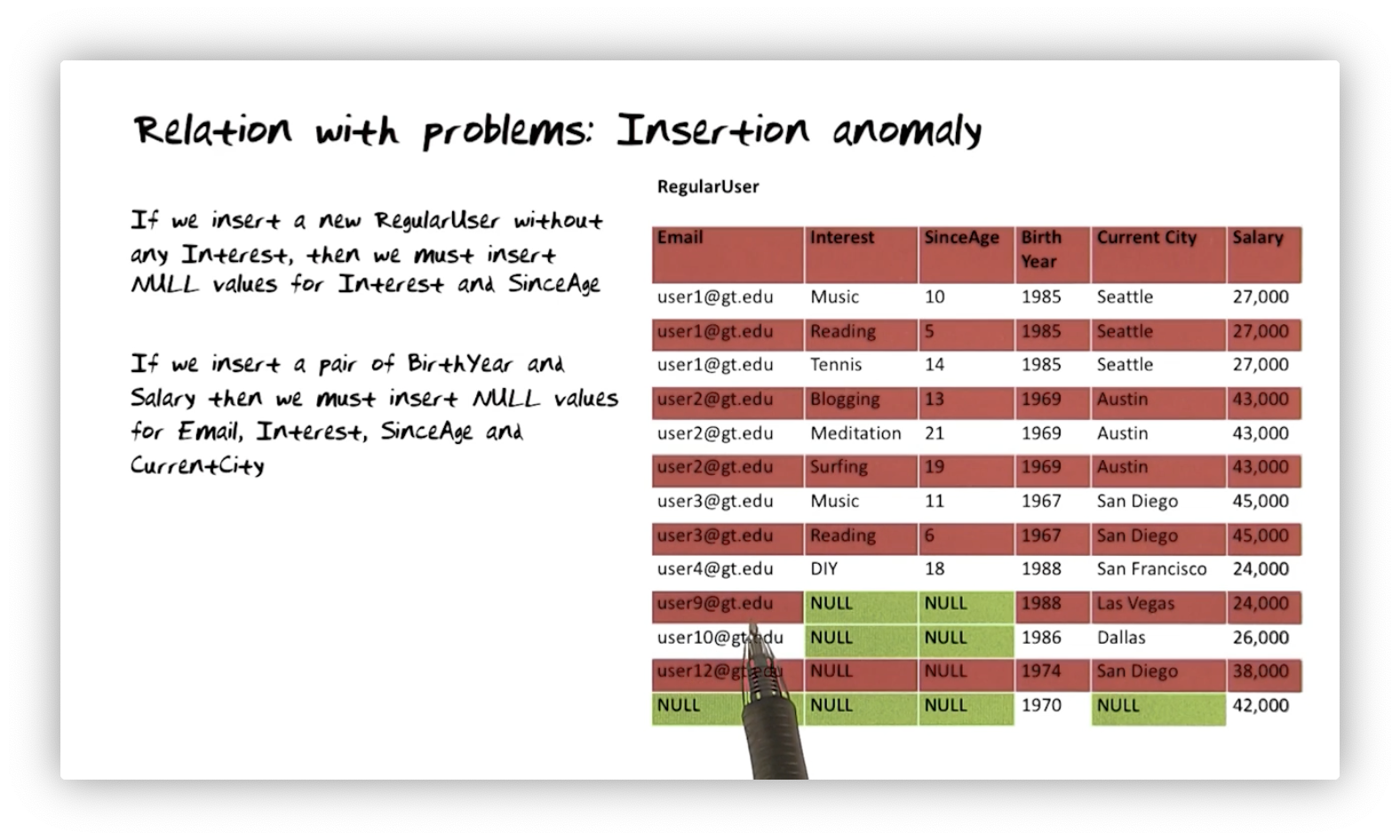 Let's say we want to insert the information in the database that people born in 1970 make 42000. If we don't already have a user born in 1970 in RegularUser, we must insert a new row that has 1970 for Birth Year, 42000 for Salary, and NULL for every other attribute.

Here we want to delete user twelve from the database. Unfortunately, since this user is the only regular user born in 1974, by deleting this row, we also lose the information that people born in 1974 make 38000. 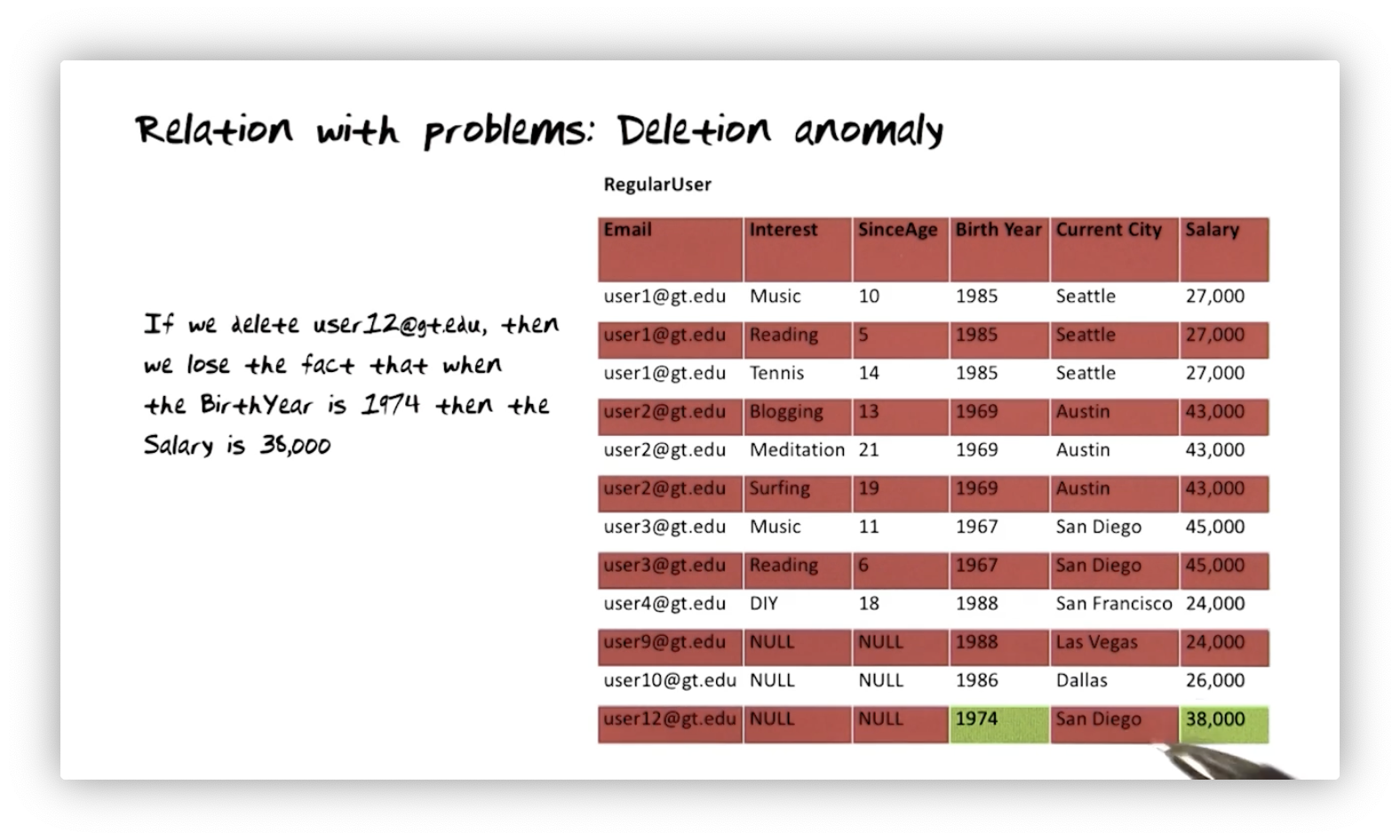 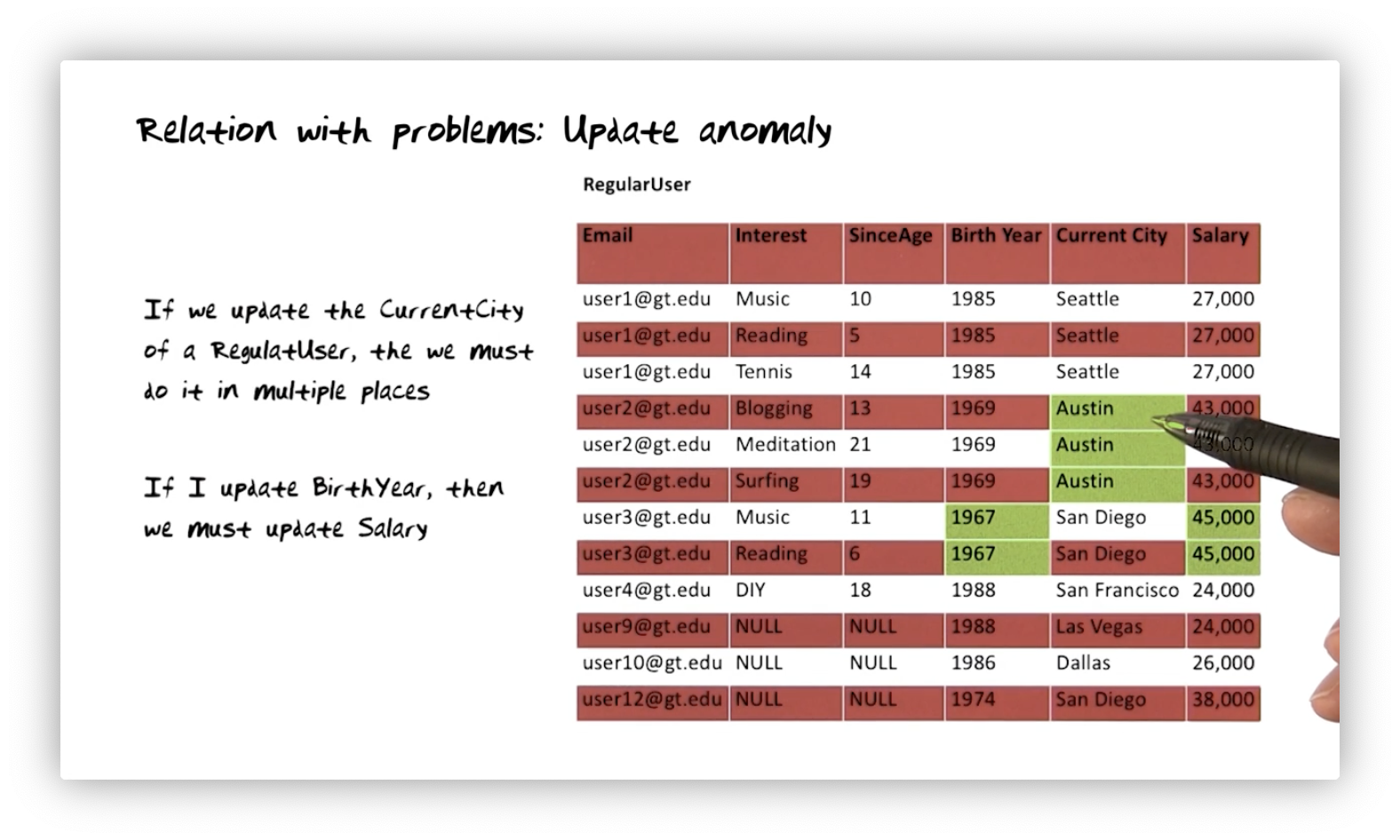 Decomposing this table into multiple tables enables us to enforce the functional dependencies we discussed without issue. A correct decomposition process retains all the information from the initial table in the resulting tables. 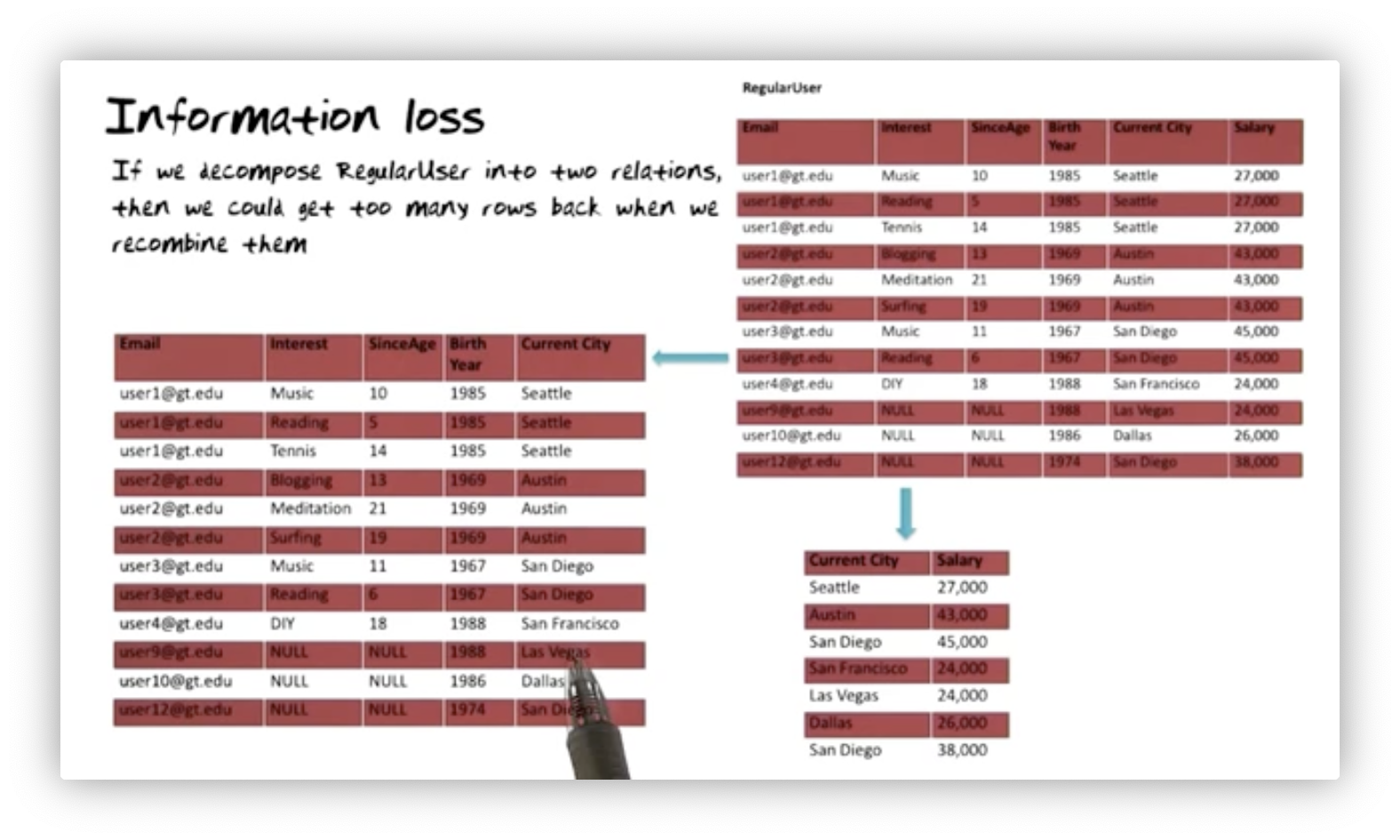 Even though structuring the data in one relation presented problems, we still want a mechanism to reconstitute that view. When we decompose a table, we must share at least one attribute between the two resulting tables. In this case, A and B share the Current City attribute, and if we join them on Current City, we can recreate RegularUser.

Unfortunately, this particular decomposition has an issue. Table B has two tuples where the value of Current City is San Diego. When we join B and A, we will get two tuples for user three and user twelve, one for each tuple in B referencing San Diego. Joining the two decomposed relations together creates two additional rows absent from RegularUser.

We call this phenomenon information loss. Even though we are getting more information in this situation, not less, we have lost our ability to distinguish between what is real and what is false. We are now unable to determine the salary of those two users accurately.

When all the information is together in the original table, it is possible to enforce the functional dependencies of our system. However, we may lose that ability when decomposing a table into multiple tables. Remember the decomposition from earlier.

We have two examples of such dependency loss here. We have one functional dependency stating that Email must dictate Salary. Similarly, we said Birth Year must determine Salary. Since neither of these pairs of attributes exists in the same table, we cannot enforce the dependency between them in a table. 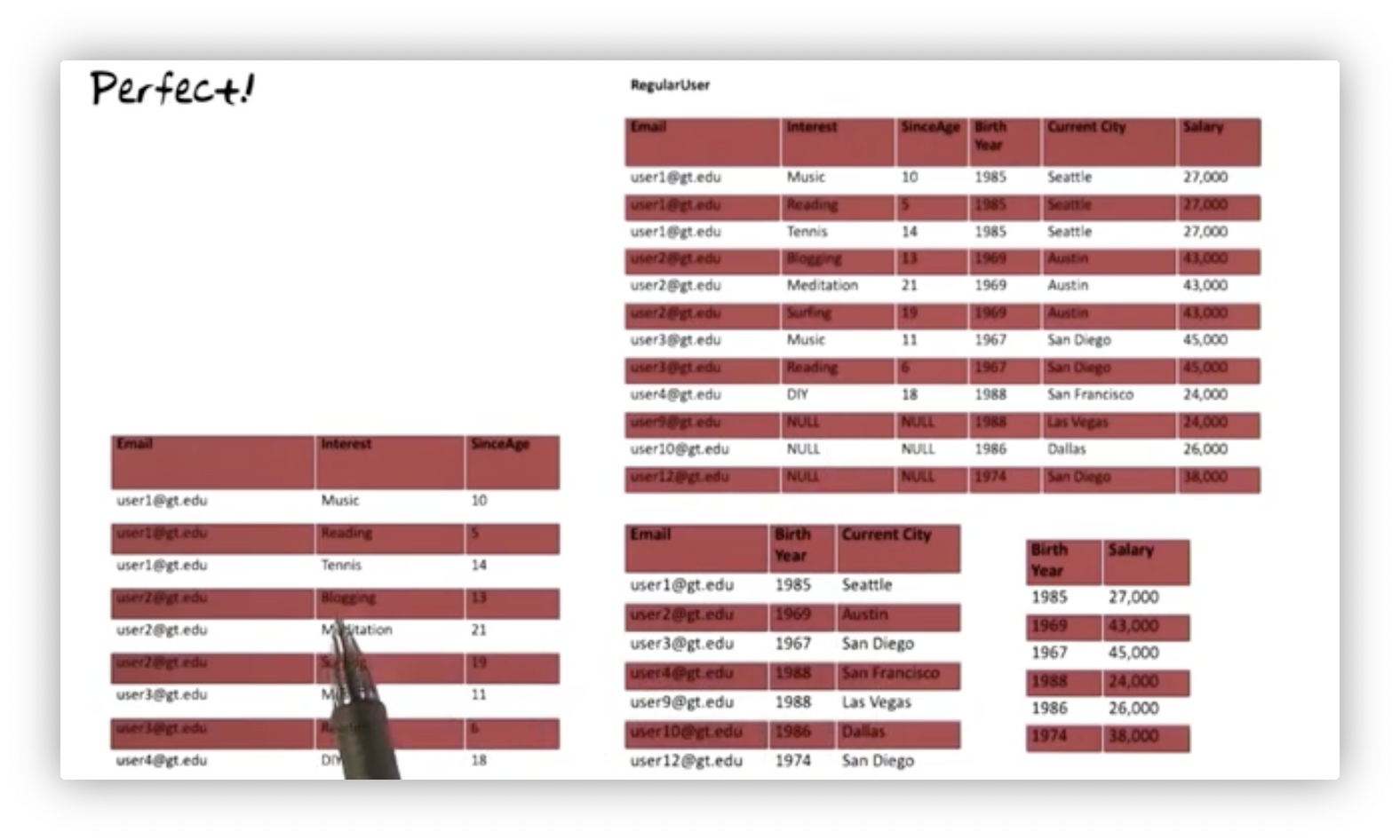 The original RegularUser table had many redundancies, e.g., user one's information repeated three times, one for each interest. This decomposition eliminates all redundancies, making it impossible for us to end up with an inconsistent database.

This decomposition does not introduce any information loss. Joining these decomposed tables produces exactly the information in the original RegularUser table: no less, no more. We also have no dependency loss. We have a separate relation for each dependency:

The big question is: how do we get here? In other words, starting with RegularUser, how do we arrive at this particular decomposition out of the many possibilities?

Let's start by defining functional dependencies. If X and Y are sets of attributes in relation R, then we say that Y is functionally dependent on X iff for each x in R.X, there is precisely one y in R.Y. Consider the following relations. 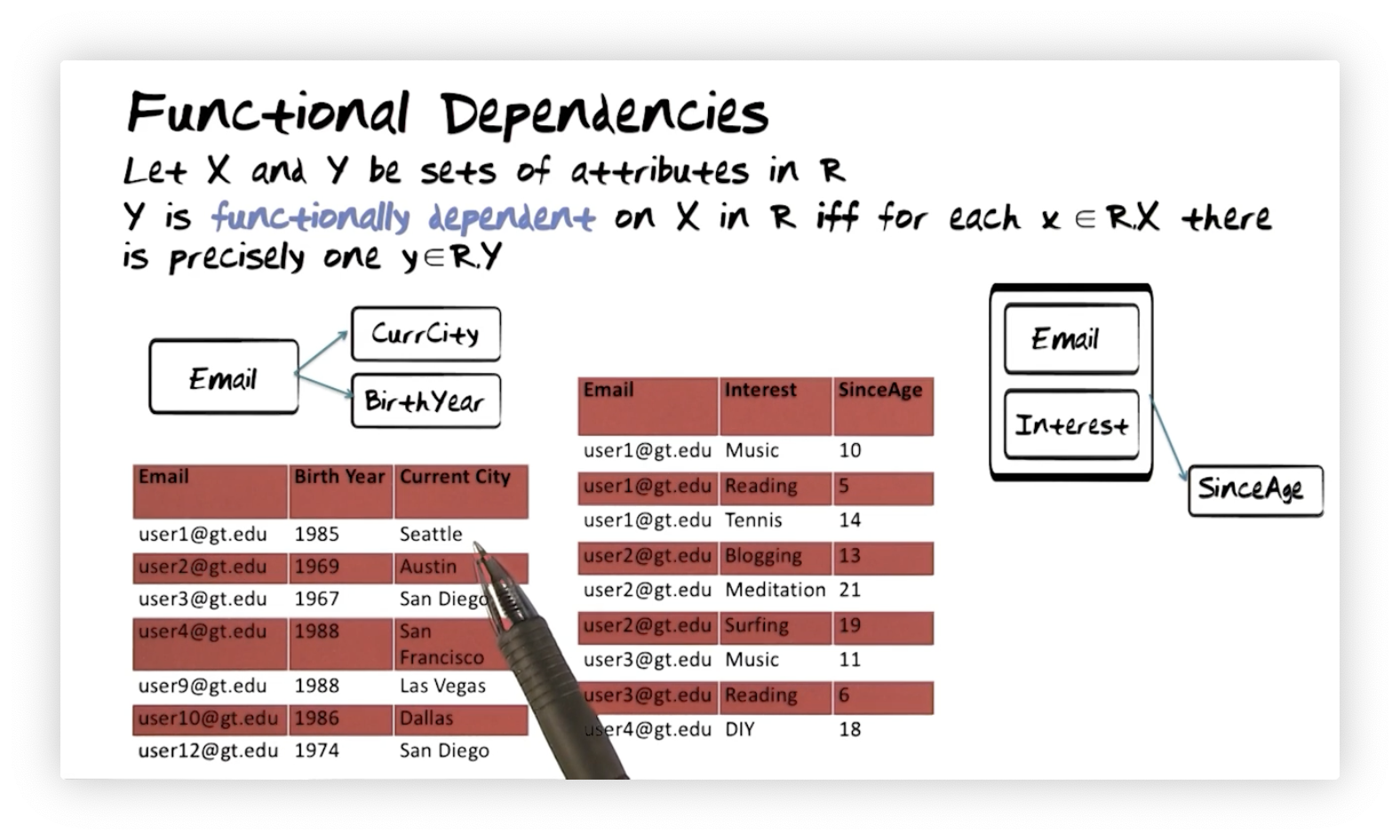 Now that we've seen how to identify a functional dependency, how do we enforce one? 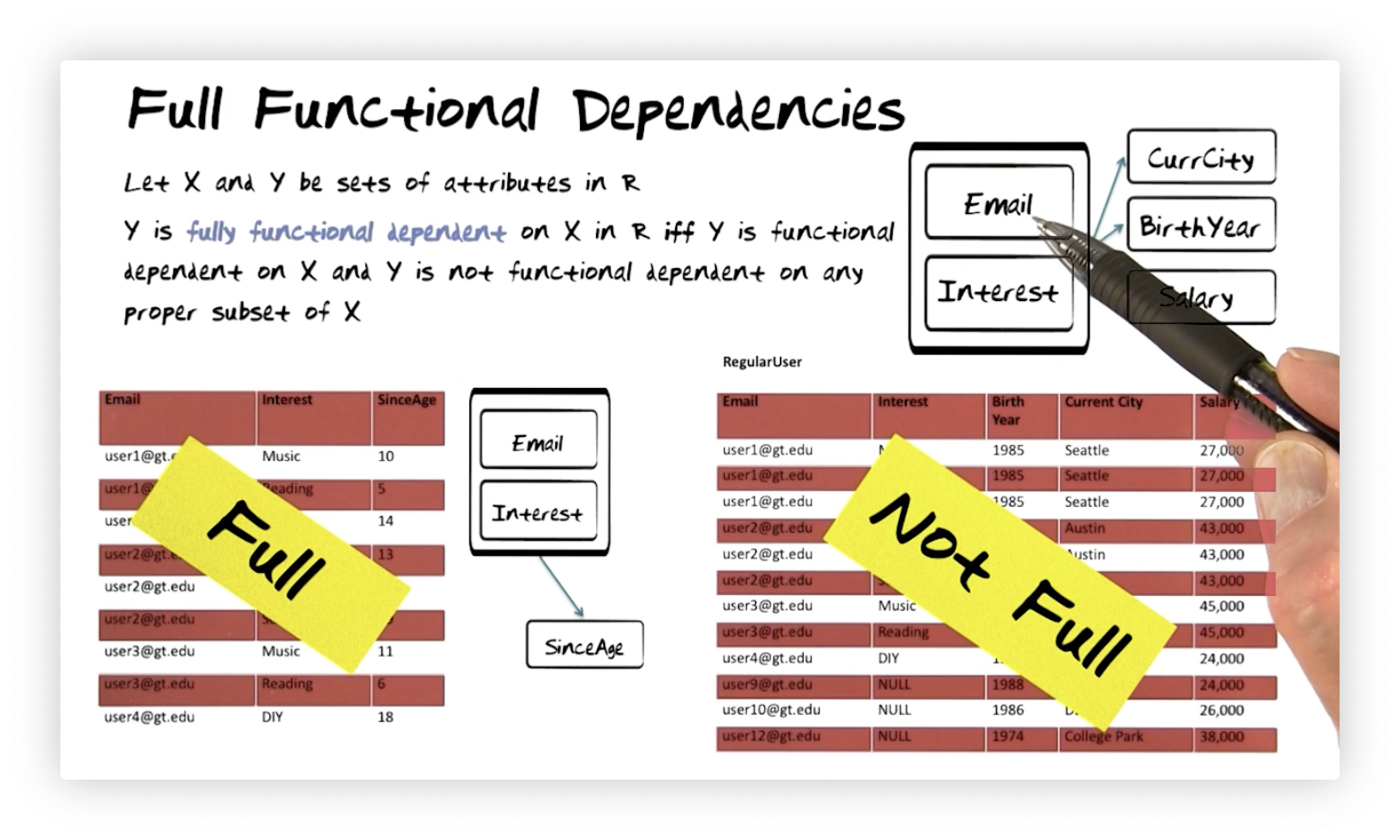 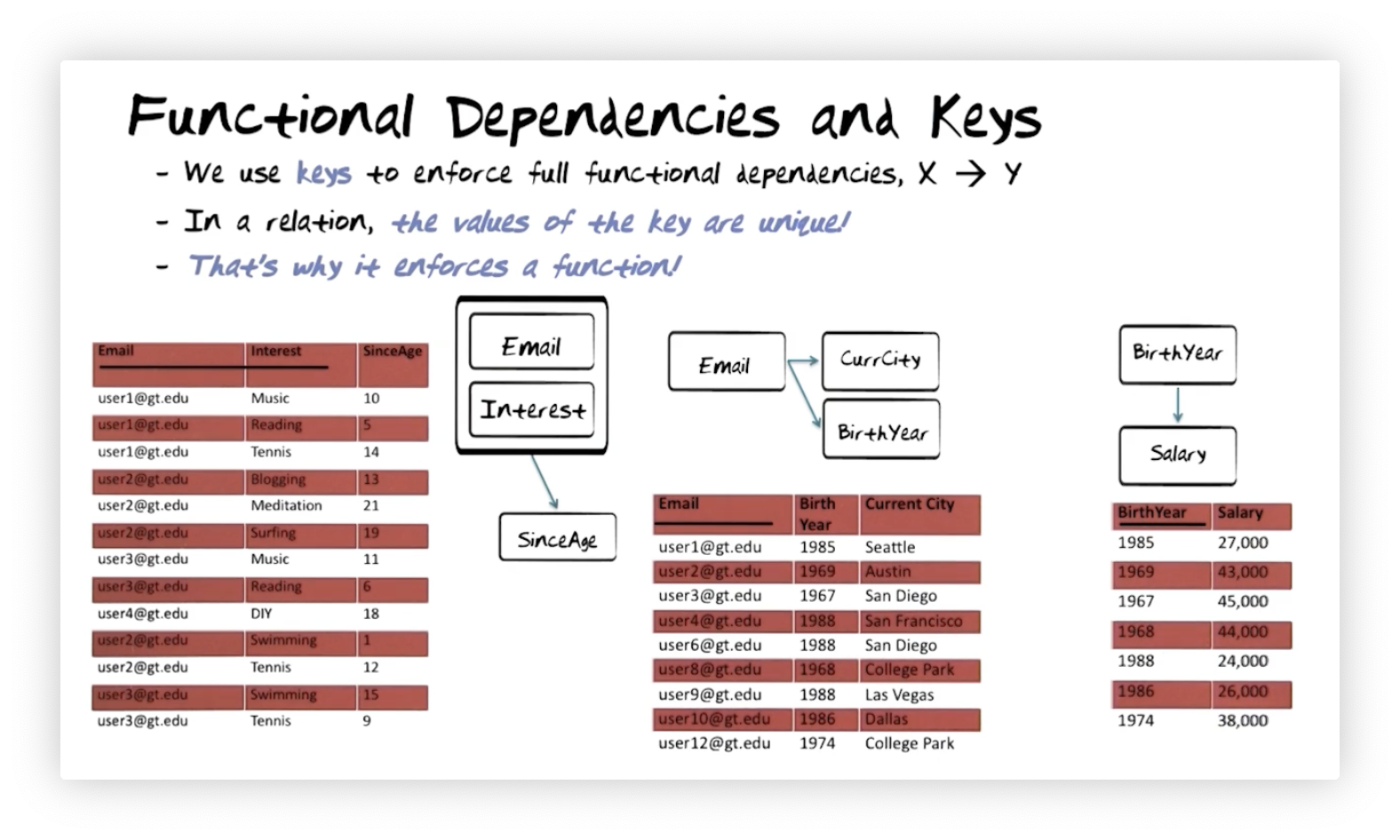 For the relation in the middle, we need to enforce the dependency that Email determines Current City and Birth Year. Again, we make Email the key, so the values for that attribute will be unique. Thus, each Email will map to a single Birth Year and Current City.

On the right, we want to enforce the functional dependency that Birth Year determines Salary. We can follow the pattern from the other two examples and make Birth Year the key. Again, the uniqueness constraint on key values means that a particular Birth Year will always point to exactly one Salary.

These relationships are functions; in other words, given an input X, these dependencies always produce one value of Y. There's a function from the pair of Email and Interest to SinceAge, from Email to Birth Year, from Email to Current City, and from Birth Year to Salary. 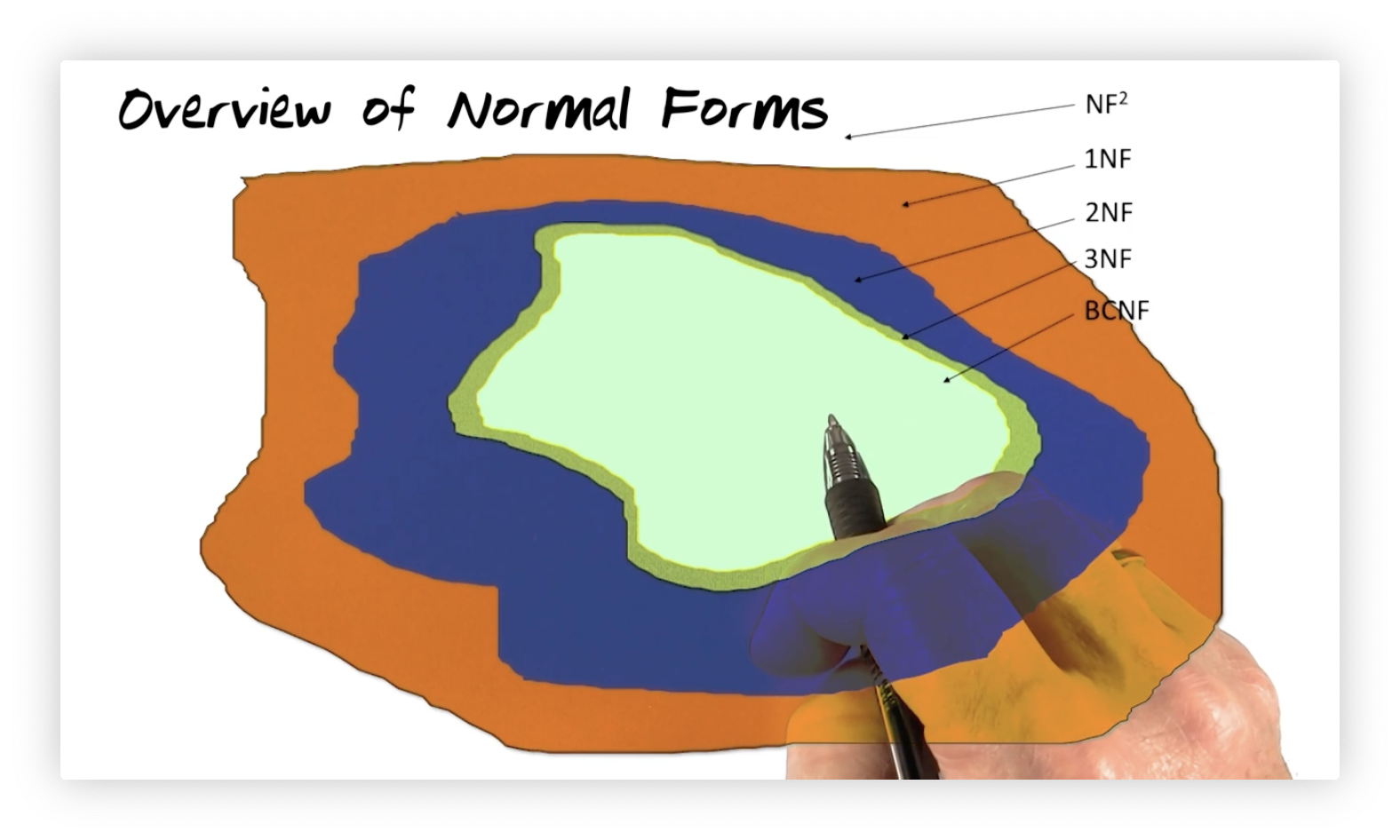 The Kent and Diehr quote, which resembles the sworn testimony oath in the United States, is:

Recall again the example relation we have been studying. This relation has Email, Interest, Current City, Birth Year, Salary, and SinceAge, and the following functional dependencies: 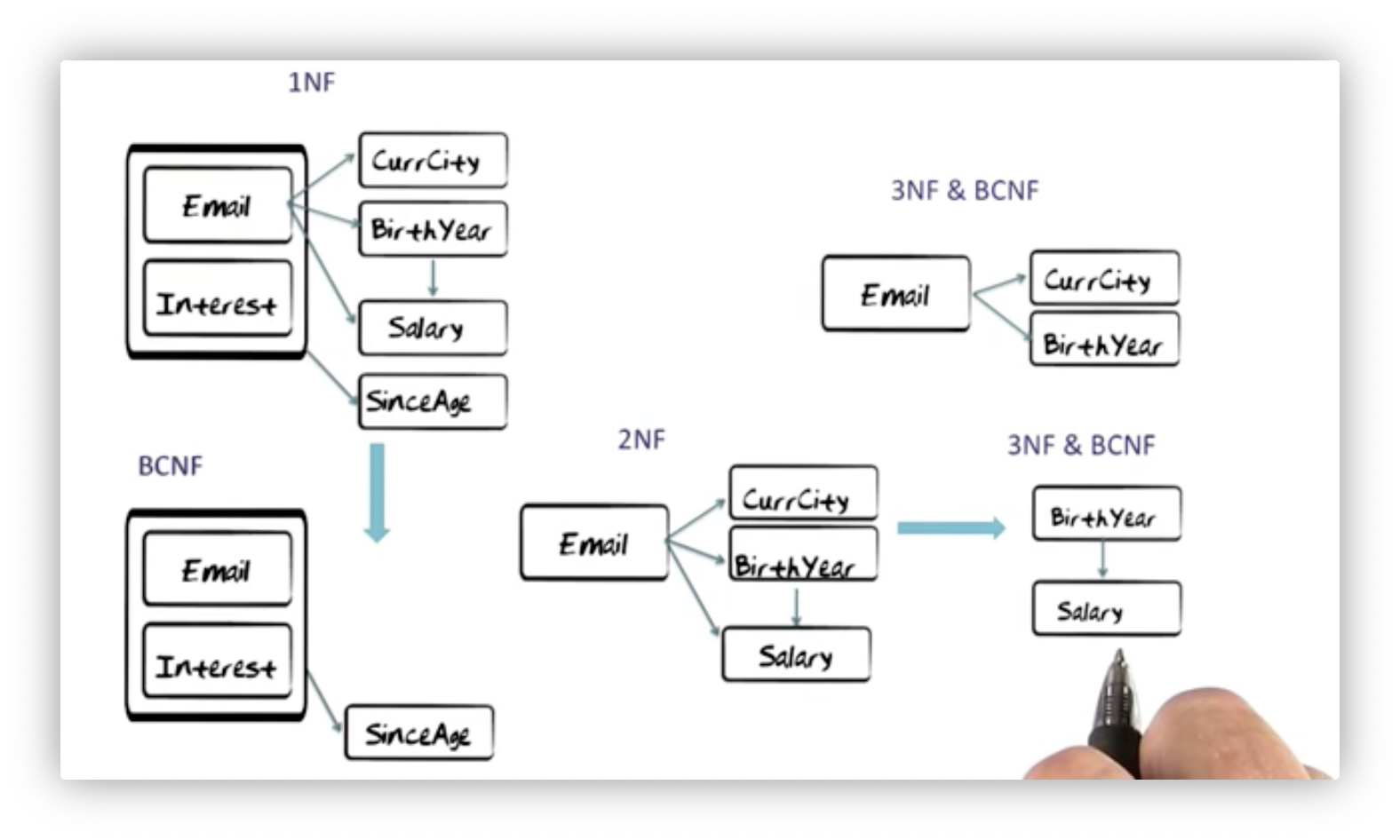 Extracting this relation leaves us with a relation containing Email, Current City, Birth Year, and Salary attributes. What normal form is this relation in? It must at least be in second normal form because all of these attributes fully depend on the key, Email. Unfortunately, there are transitive dependencies: Email determines Birth Year, which in turn determines Salary, resulting in the functional dependency from Email to Salary, so it is not in third normal form.

How to Compute with Functional Dependencies: Armstrong's rules

We use Armstrong's rules, named after William Armstrong, to ensure that we do not lose information and that we preserve functional dependencies when we decompose relations.

How to Guarantee Lossless Joins? 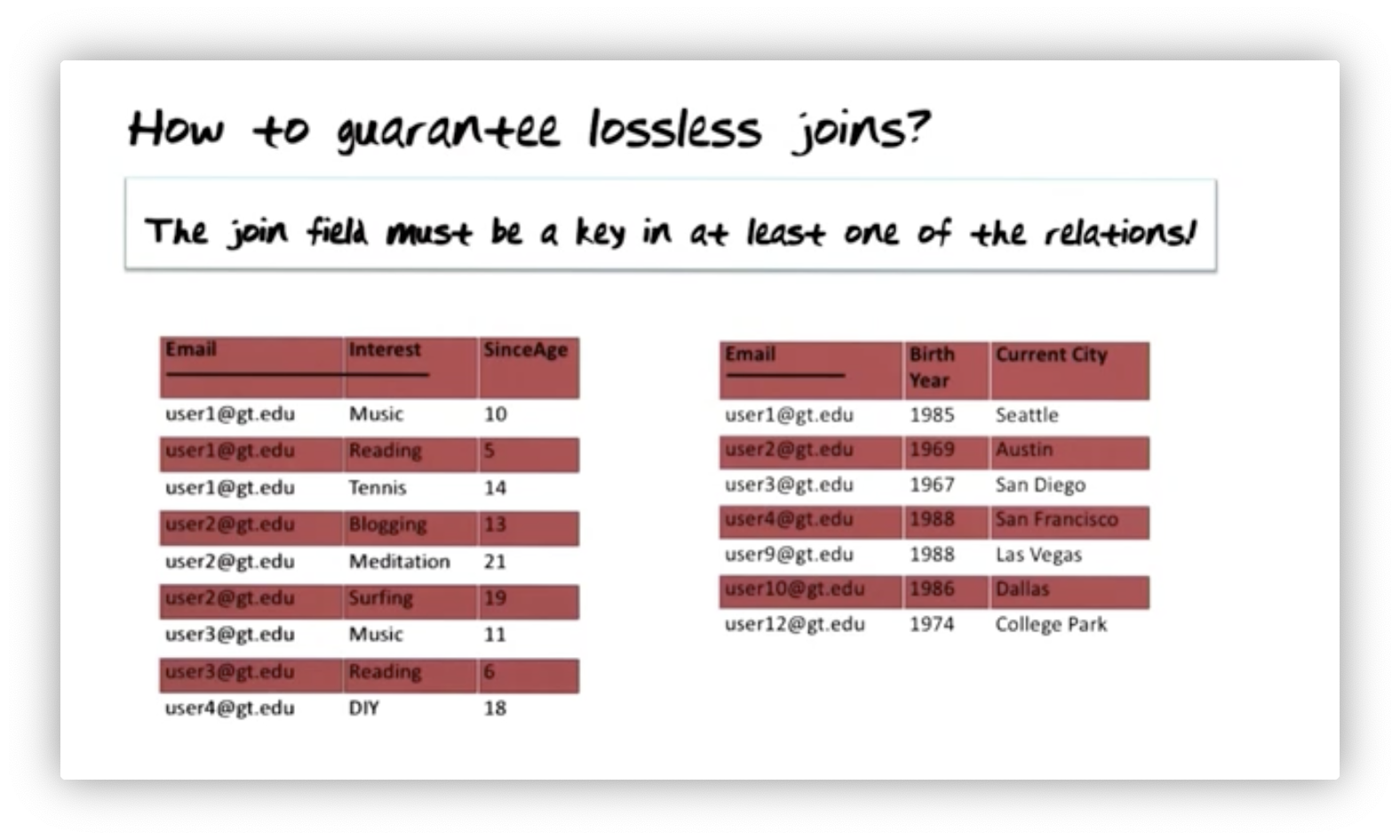 When we join these two relations again on Email, we are guaranteed not to create additional tuples that were not present in the original relation.

How to Guarantee Preservation of Functional Dependencies?

An original functional dependency, we had stated that Email must determine Salary. In our final set of relations, we see that only Birth Year explicitly determines Salary. However, we also see that Email determines Birth Year, and we know by transitivity that Email must determine Salary. Therefore, the meaning implied by the final set of functional dependencies is the same as the original set, even if this particular dependency is no longer explicit.

Let's return to the decomposition we performed previously.

When we further decompose the second normal form relation, let's ask the same two questions again. Is the decomposition lossless? The join attribute here is Birth Year, which is definitely the key in one relation. Therefore: the join is lossless. The decomposition is also dependency preserving. Email determines Birth Year, which determines Salary. The functional dependency of Salary on Email is implied by transitivity, which is the only dependency that is not explicit.

It Never Happens in Practice

It really never happens in practice that there is a third normal form relation that is not also in Boyce-Codd normal form. In his thirty-five years of professional work with databases, Professor Mark has never seen it.