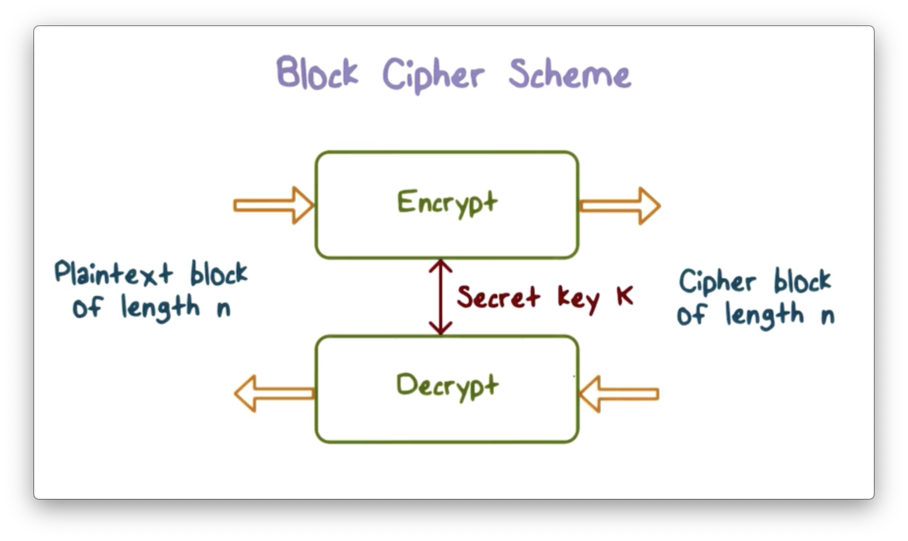 The goal of encryption is to transform plaintext into an unintelligible form. Since we assume that an attacker can obtain the ciphertext, we don't want the ciphertext to convey any information about the key or the plaintext.

Confusion obscures the relationship between the key and the ciphertext and is typically achieved with substitution. Through confusion, the attacker cannot determine the key, even if they obtain the ciphertext.

The second principle that we need is diffusion. Diffusion spreads the influence of one plaintext bit over many ciphertext bits to hide the statistical properties of the plaintext. We can achieve diffusion with permutation. 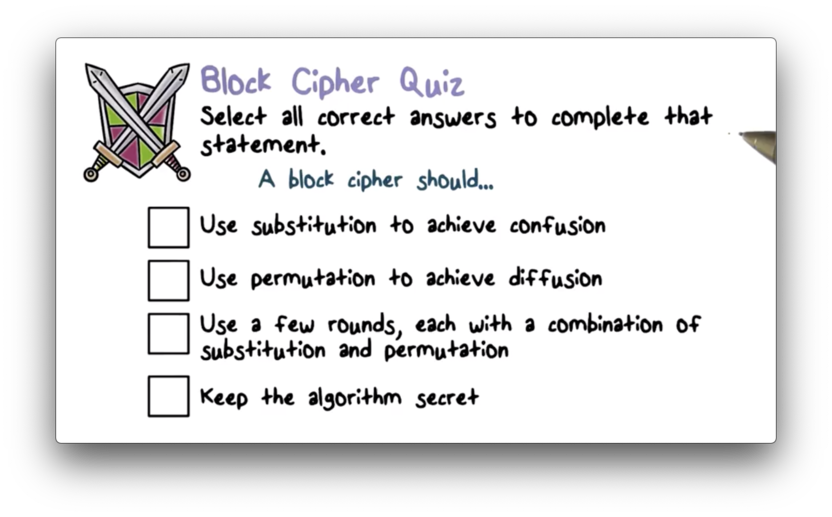 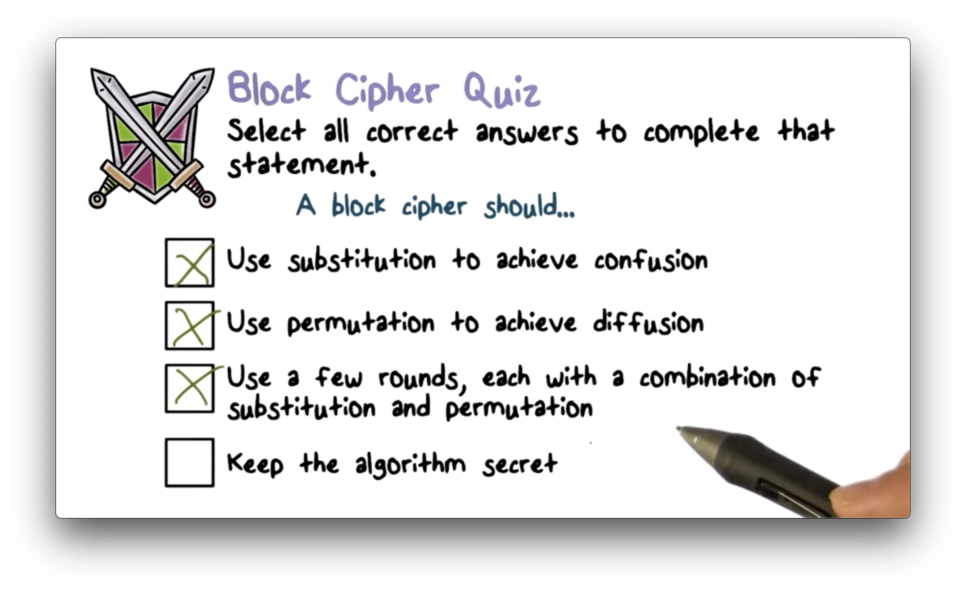 A widely used symmetric encryption scheme is based on the Data Encryption Standard (DES), which was established in 1977 and standardized in 1979. 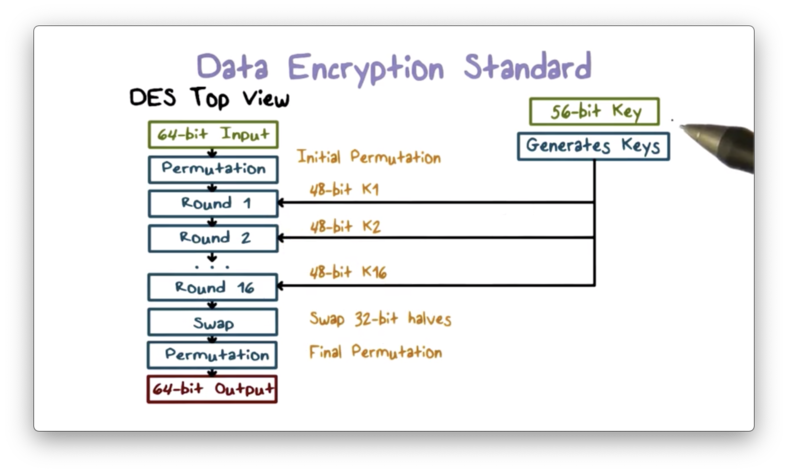 In DES, the key is 64 bits (8 bytes) long. For each byte, there is one parity bit, so the actual value of the key is only 56 bits. DES receives a 64-bit plaintext block as input and produces a 64-bit ciphertext block.

DES contains an initial and final permutation step that remaps the positions of the bits to achieve diffusion. 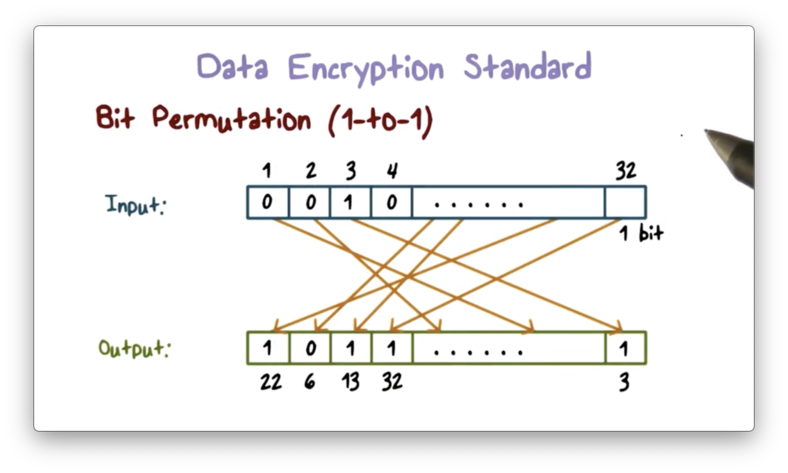 In between the permutation steps, DES performs 16 rounds of operations using 16 48-bit subkeys generated from the original 56-bit key. Each round receives as input the ciphertext produced by the previous round and outputs the ciphertext used as input by the next round.

The mangler function receives a 32-bit input, expands it to 48 bits, XORs it with the 48-bit per-round key, and then passes it to an S-box to substitute the 48-bit value back into a 32-bit value. 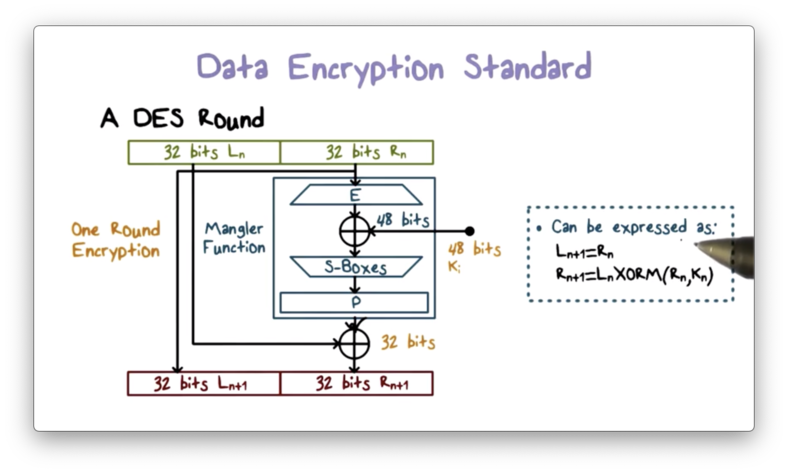 DES is a Fiestel cipher, which means that encryption and decryption differ only in key schedule. In decryption, we apply the same operations as we do in encryption, but with a reverse key sequence. Formally, round l of decryption uses subkey 16 - l + 1.

After 16 rounds of decryption, the algorithm has recovered the right and left halves of the original plaintext, and the final swap arranges the halves in the correct order. 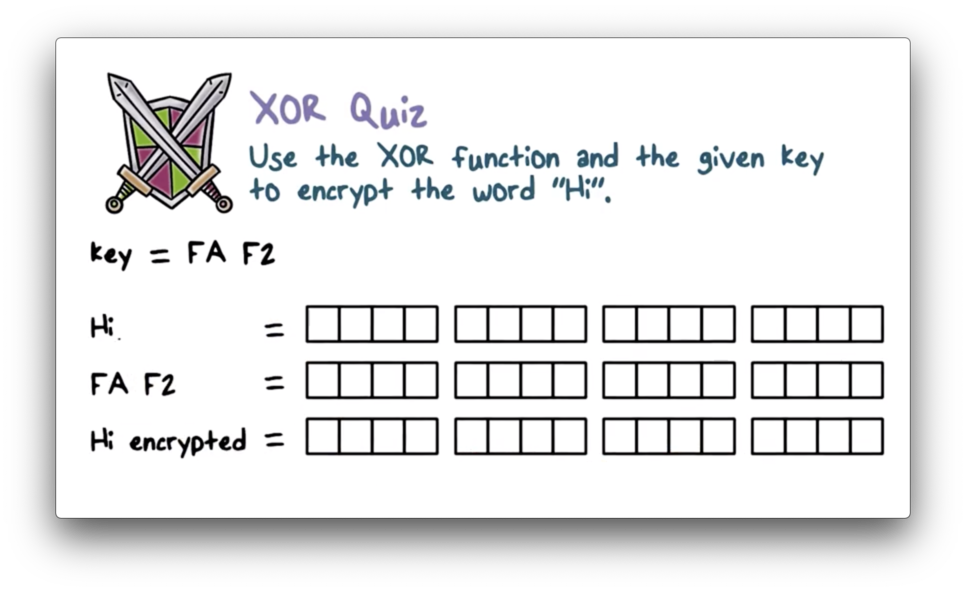 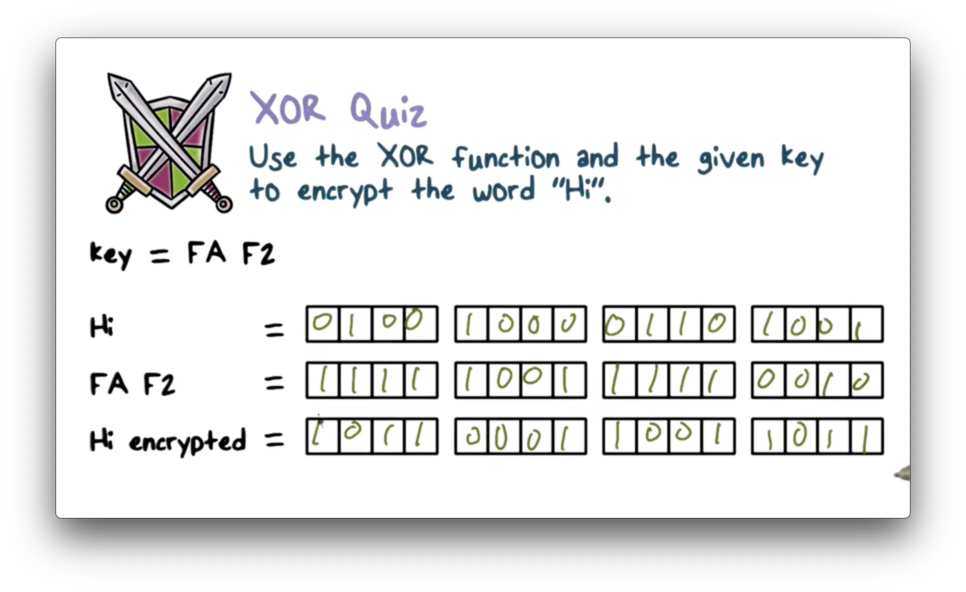 The mangler function performs the bulk of the processing in a DES round. It expands the right half of the input from 32 bits to 48 bits and XORs it with the per-round key. The result is substituted back into a 32-bit value, which the function then permutates. 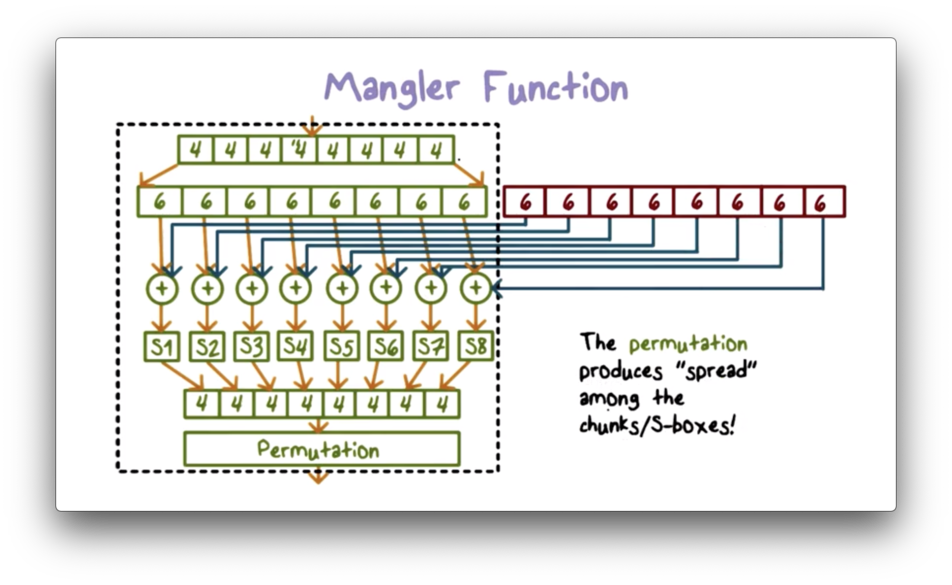 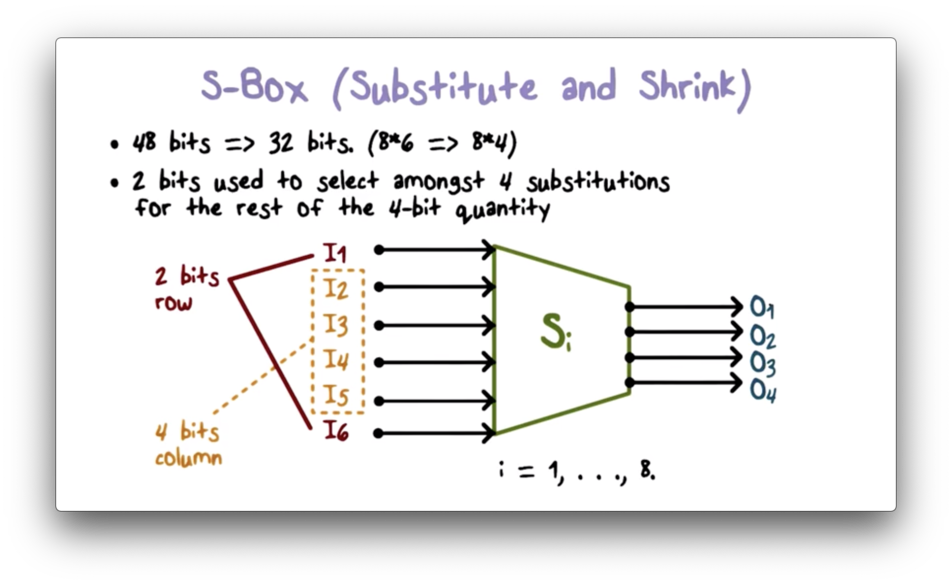 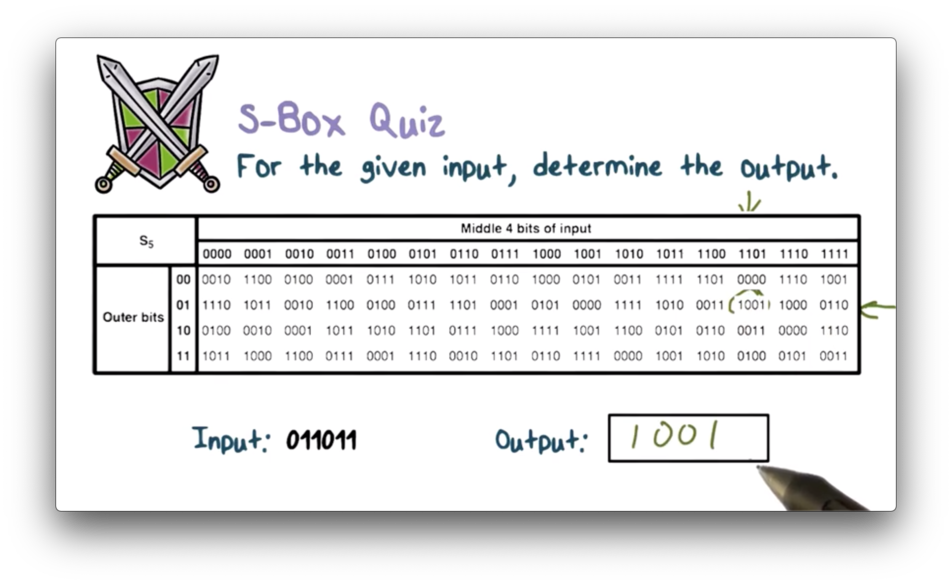 The key size in DES is 56 bits, so there are only 2^56 possible keys. This keyspace is too small, and an attacker can use brute-force to find the correct key relatively easily using today's computers.

One could argue that the designer should have published the design criteria so that researchers could review them and improve upon them.

To overcome the small keyspace that renders DES insecure, we can run DES multiple times, using a different key each time. The standard is to run it three times, and the resulting scheme is called triple DES. 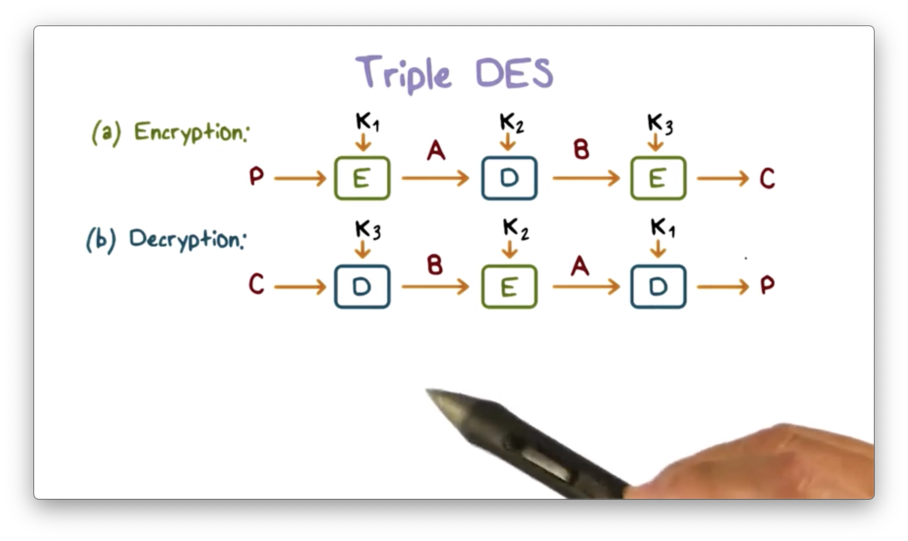 This order of operations is advantageous because it supports multiple key lengths. For example, if k1 and k3 are equal, the result is 112-bit DES. If all three keys are different, the effective key length is 168 bits.

Additionally, if we set k2 equal to k1, then triple DES has essentially become single DES using k3. Using this configuration, we can allow DES and triple DES to communicate with one another. 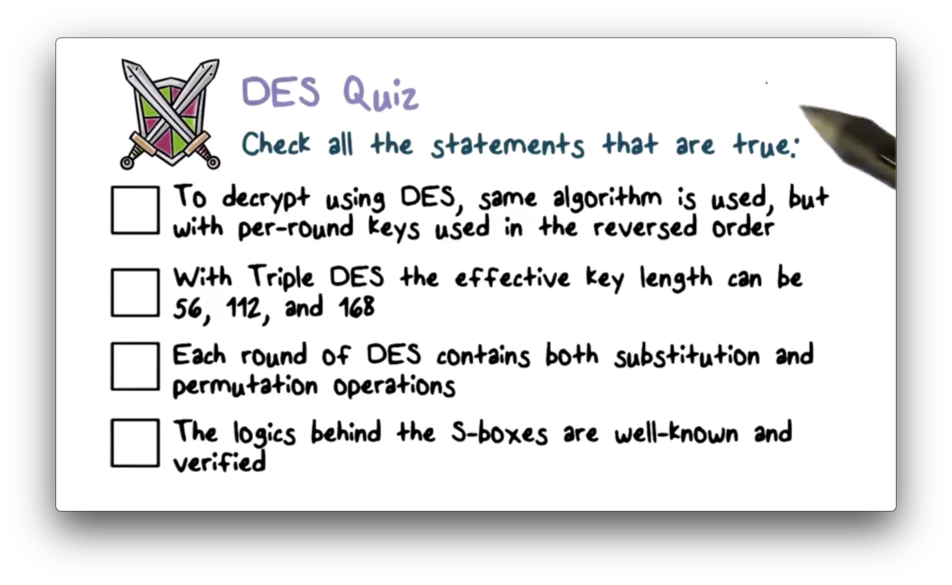 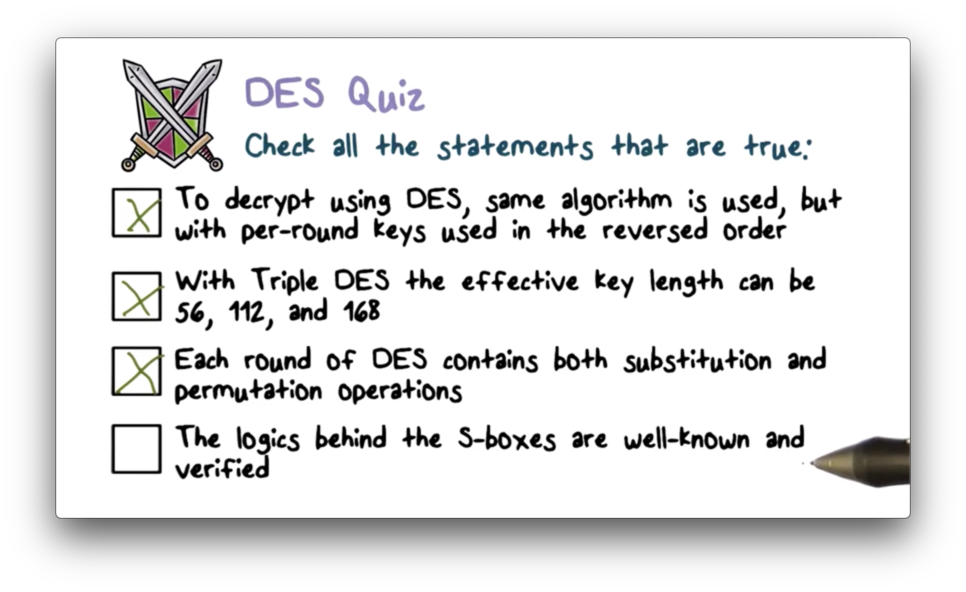 Key length is a significant shortcoming of DES. At 56 bits long, the keyspace for DES is too small, and an attacker can use brute force to find a key with the power of modern computers. While we can use triple DES to increase the key length, running DES three times is not an efficient approach.

The replacement for DES is the Advanced Encryption Standard (AES). Like DES, AES is a block cipher. Whereas in DES, the input plaintext block is 64-bit, it is 128-bit in AES. In DES, the key length is only 56-bit, but in AES, the key can be 128, 192, or 256 bits long. Researches consider these key lengths long enough to defeat brute force attempts.

The following diagram presents a high-level overview of AES. 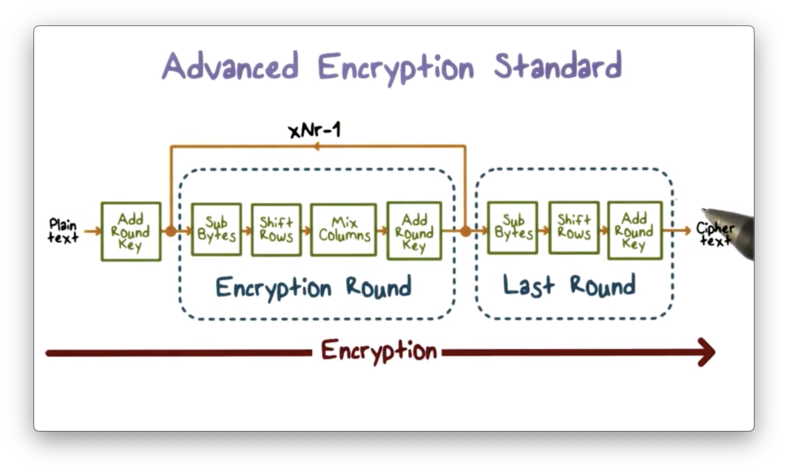 Each block of plaintext that AES operates on is represented as a square matrix called the state array. This array is first XORed with a per-round key before going through multiple rounds of encryption.

In each round, the state array passes through several operations - SubBytes, ShiftRows, and MixColumns - which represent substitution and permutation. The transformed value of the state array is XORed with the per-round key and then passed as input to the next round. The final round, which excludes the MixColumns step, produces the ciphertext.

Adding the per-round key involves the XOR operation, which by itself is reversible. The decryption process uses an inverse function to reverse the other operations: SubBytes, ShiftRows, and MixColumns. Since each operation is reversible, the entire process is reversible, and we can recover the plaintext from the ciphertext.

Let's take a closer look at each round of AES and the transformations the algorithm performs on the state matrix S. Each operation updates the value of S directly. 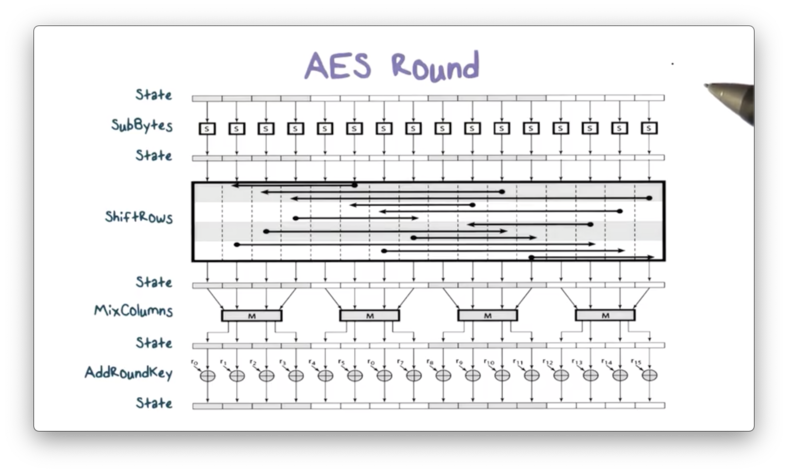 First, SubBytes uses S-boxes to perform a byte-by-byte substitution. Next, ShiftRows permutates S by shifting the bytes in each row of S a specified amount. Then, MixColumns substitutes each byte in a column as a function of all the bytes in the column. Finally, AddRoundKey XORs S with the per-round key, passing the final value of S to the next encryption round. 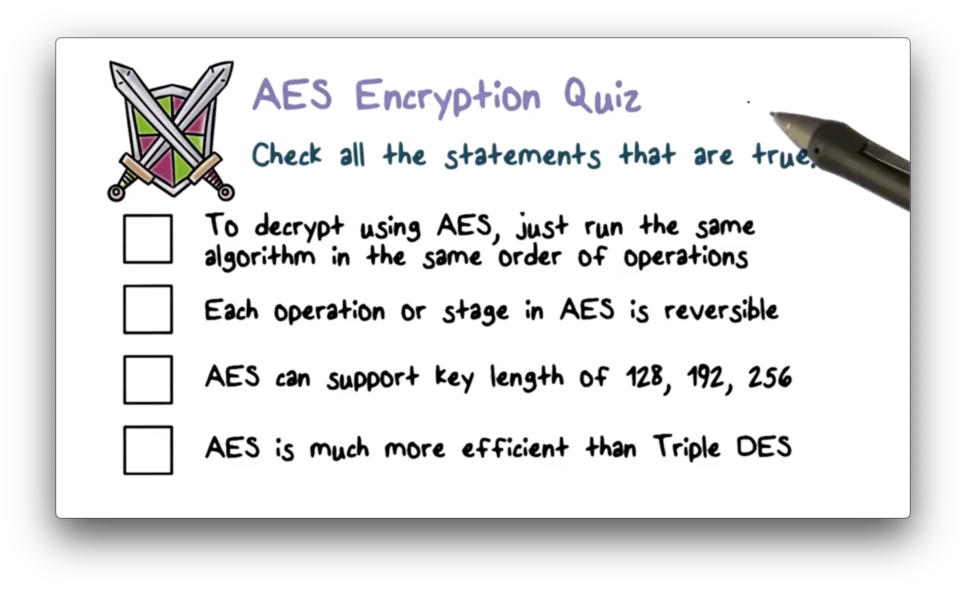 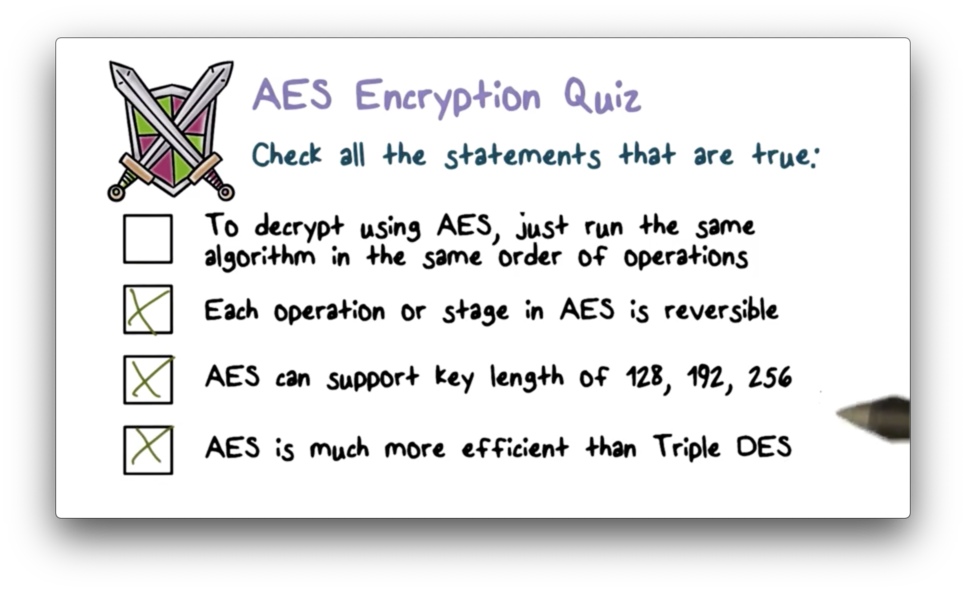 A block cipher takes in a fixed-length data block as input: 64 bits in DES and 128 bits in AES. If we want to encrypt a much bigger message, the solution seems obvious: break the message into fixed-size blocks, apply the cipher to each block, and combine the resulting ciphertexts.

The simplest method for encrypting large messages is to use an electronic codebook (ECB). 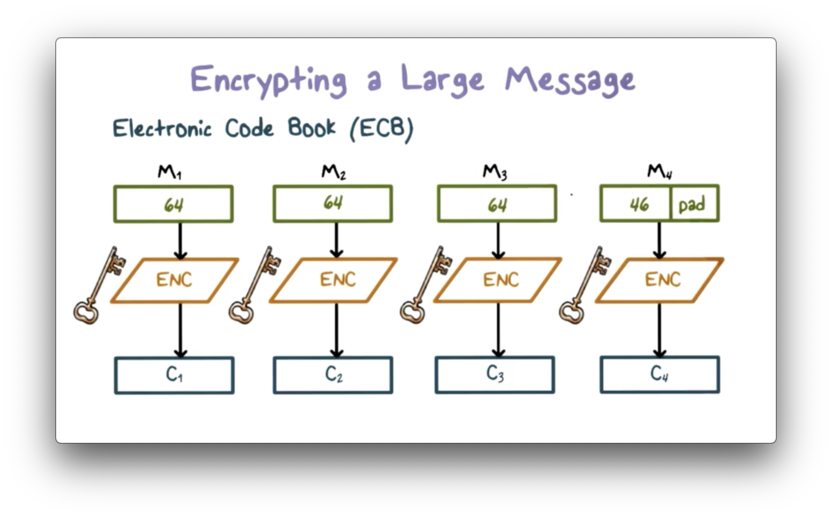 First, the original large message is broken down into fixed-size blocks. The final block is potentially padded if it is smaller than the block size. Each plaintext block is then encrypted using the same key, and the collection of ciphertext blocks is the ciphertext of the original message.

There are significant shortcomings with the ECB approach, which make it a weak candidate for ensuring confidentiality.

For a given key, two identical plaintext blocks produce identical ciphertext blocks. As long as the same key is in use, this parity exists within a message and across distinct messages.

Cryptanalysts can exploit this consistency. For example, if an analyst knows that a message always starts with specific predefined fields, then they might immediately have several known plaintext/ciphertext pairs to aid their analysis.

Cryptanalysts can also leverage repetitive elements in a message. Whenever they see two identical ciphertext blocks, they know that the corresponding plaintext blocks are the same.

Another problem with ECB is that the plaintext blocks are independently encrypted. An attacker can potentially rearrange inflight ciphertext blocks or substitute in a previously captured block for one currently being transmitted. Either way, an attacker can compromise message integrity as a result of the independent encryption scheme used by ECB.

The most widely-used approach for encrypting a large message is cipher block chaining (CBC). 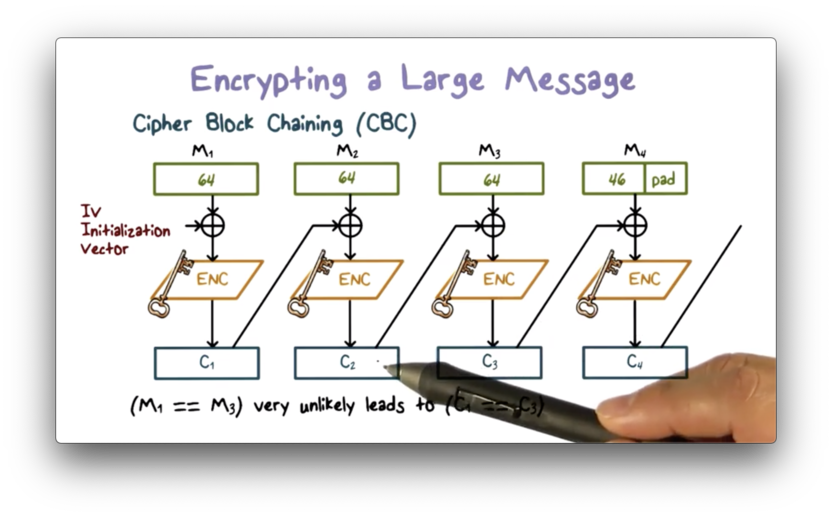 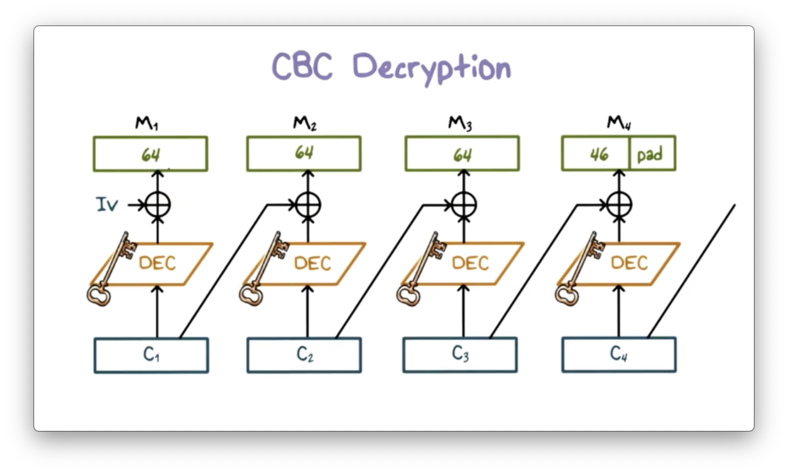 The first decrypted ciphertext block must be XORed with the IV to produce the first plaintext block, which means that the IV must be known to both parties.

While we usually discuss encryption as a method for providing confidentiality, we can also use encryption to ensure message integrity. In other words, encryption can surface unauthorized modifications to messages.

To protect both message confidentiality and integrity, we should use two separate keys and two encryption rounds: one key produces the ciphertext, and the other key produces the CBC residue. Alternatively, we can first compute a hash of the message, append the hash to the message, and then encrypt the entire entity. 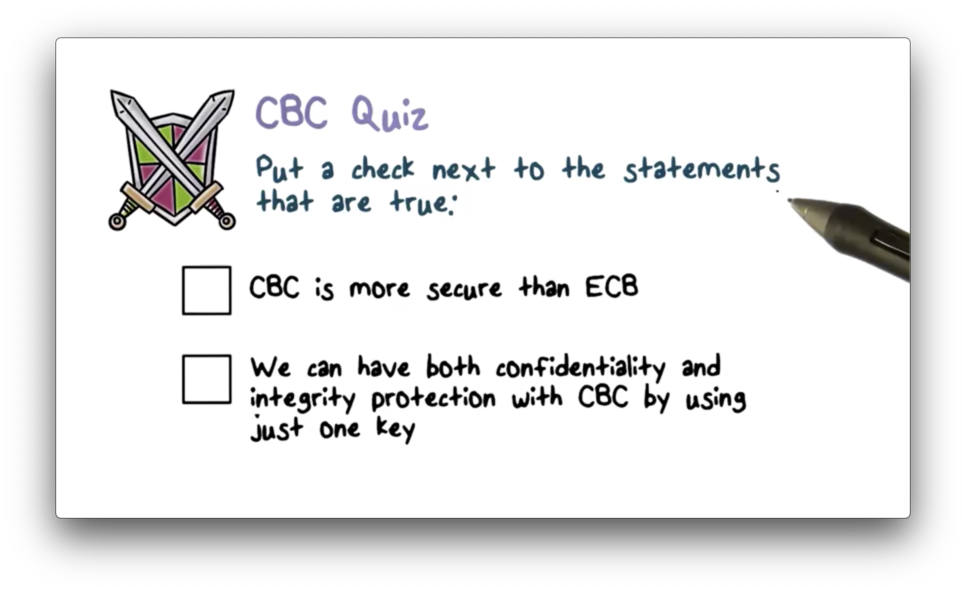 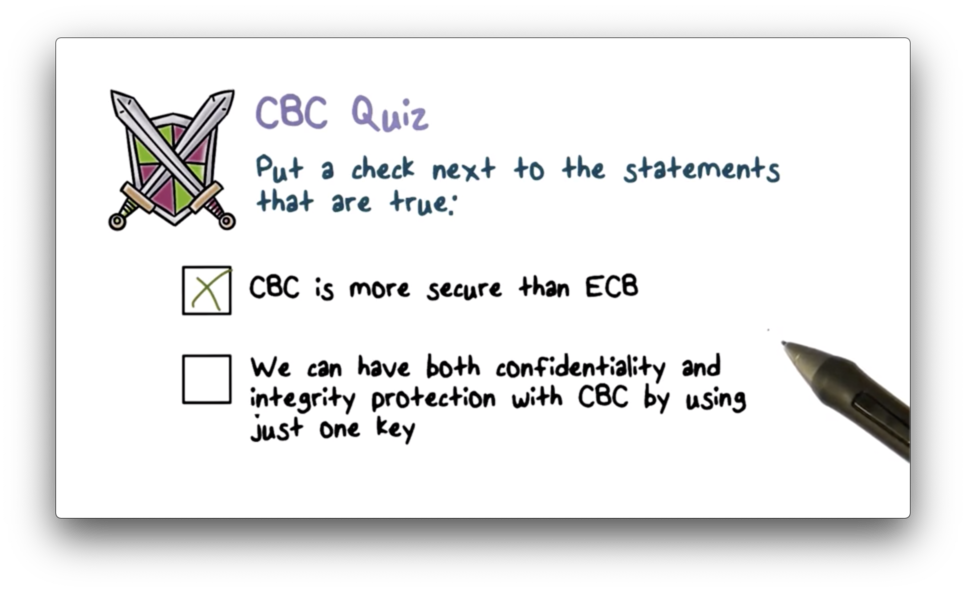