Definition of a Portfolio

A portfolio is a weighted set of assets.

Let's suppose we have a portfolio of three different assets: Apple (AAPL), Google (GOOG), and Oracle (ORCL). Let's also assume that we have allocated 60% of the portfolio to APPL, and 20% each to GOOG and ORCL.

If we consider these allocations as a set of weights instead of percentages, we would say that our AAPL position has a weight of 0.6, while our GOOG and ORCL positions each have a weight of 0.2.

We can stipulate that the sum of the weights of each investment equals one; in other words, our portfolio allocations must add to 100%. Formally, given n investments, where wi​ represents the weight of the investment in asset i,

However, not all weights need to be positive. For example, if we short GOOG, our allocation might be -0.2 instead of 0.2. We can refine the constraint above as follows. 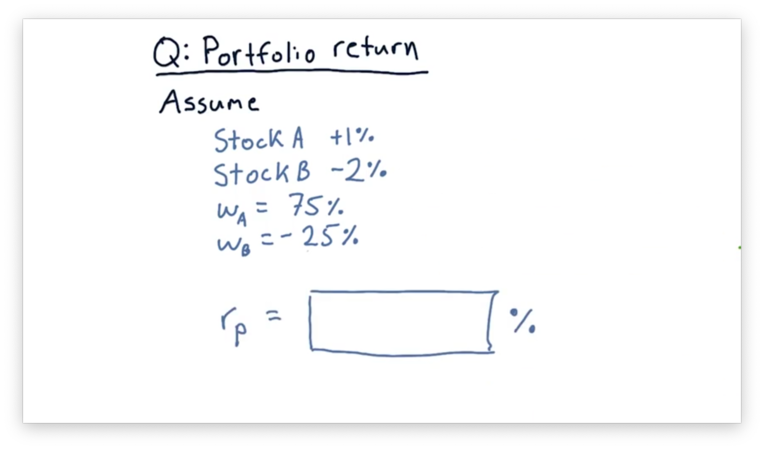 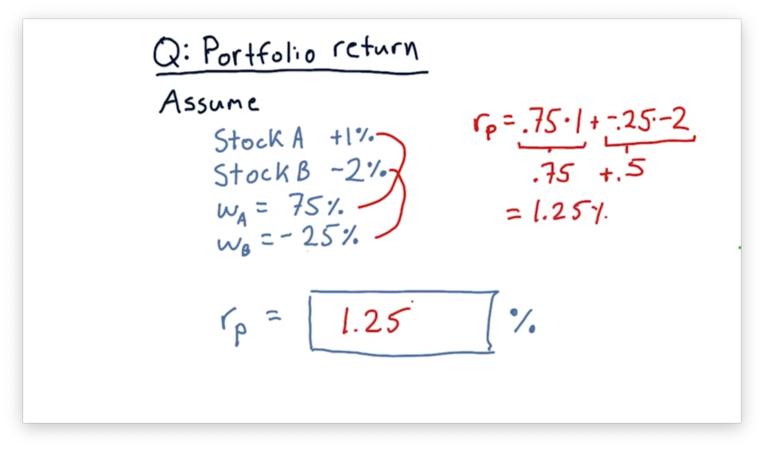 If we plug in the weights and returns for Stock A and Stock B, we can compute a portfolio return of 1.25%.

When someone refers to "the market", what they are usually referring to is an index that broadly covers a large set of stocks.

The best example of such an index in the United States is the S&P 500, which represents the 500 largest companies traded on stock exchanges. The value of the S&P 500 changes each day as a result of stock price fluctuations among its constituent companies.

There are similar stock market indices in other countries, such as FTA in the United Kingdom and TOPIX in Japan. Additionally, there are specialized indices that track companies only within specific industries, such as healthcare or technology.

Some stocks have surprisingly large weightings. For example, Apple and Exxon each comprise about 5% of the S&P 500, and the 10 largest companies account for over 20% of the performance of the index. Smaller stocks may comprise only one-tenth of one percent.

The core of the capital assets pricing model (CAPM) is captured in the following equation.

Remember that when we are talking about the market, we are explicitly talking about a stock market index, such as the S&P 500, of which stock i is a member.

Looking at the equation above, we see that the capital assets pricing model asserts that a significant portion of the return for a particular stock is due to the market. In other words, the movement of the market strongly affects the price of every individual stock in that market.

If we try to compute the historical return for a particular stock based solely on the market return and β, we won't calculate the correct value. There is going to be something "left over". The α component of the CAPM equation captures this residual.

A crucial assertion of CAPM is that the expectation for α is 0. Technically, α is a random variable with an expected value of 0. 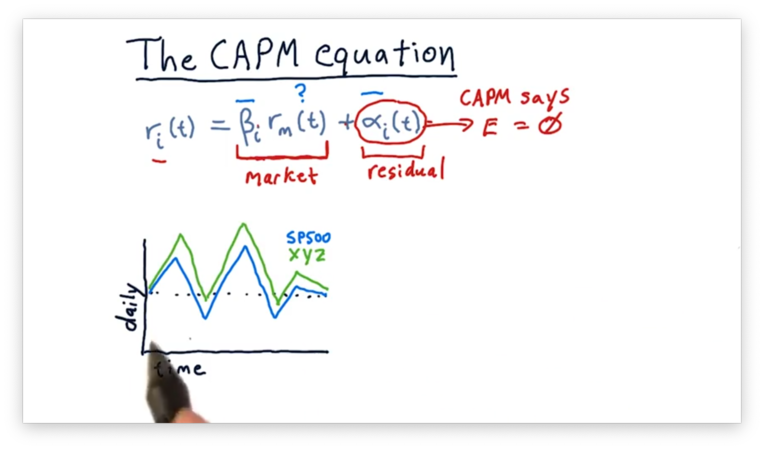 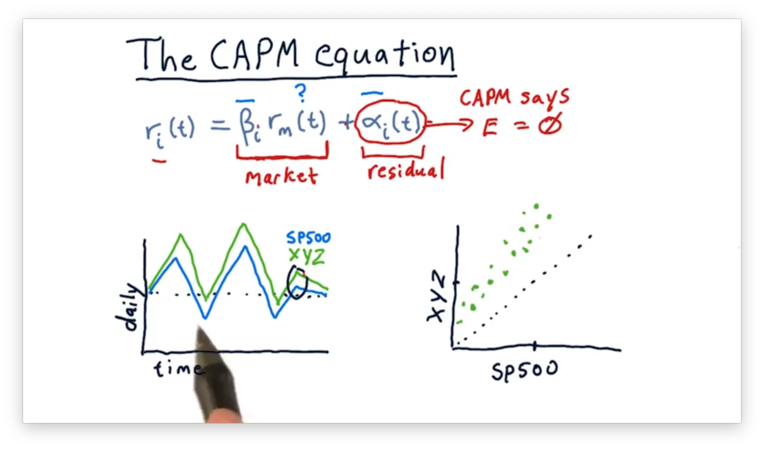 We could potentially fit the following line to this scatterplot.

Like any line, the line above can be described by two parameters: slope and y-intercept. The slope is β, and the y-intercept is α. 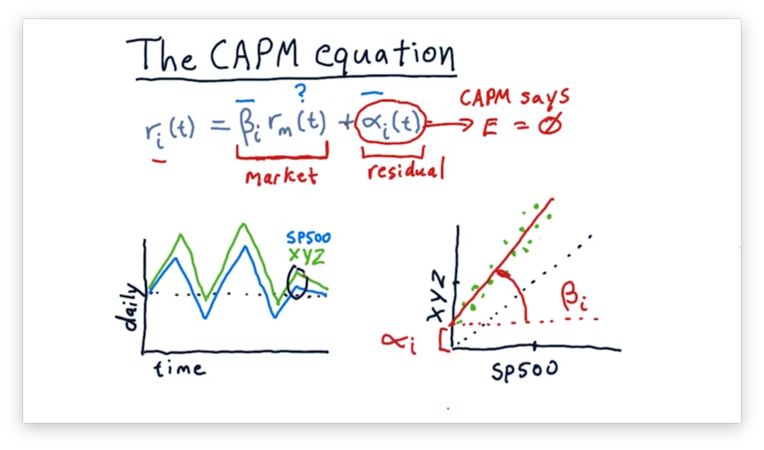 Note that this calculation of α and β is after-the-fact. Just because a particular stock had a certain α historically doesn't mean that we can expect that value to remain in the future. Again, CAPM says that we should expect α to be zero; in reality, though, α is not always zero. 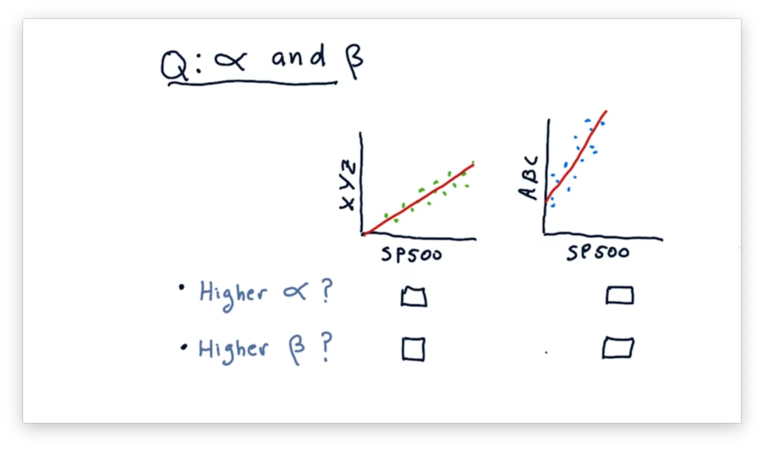 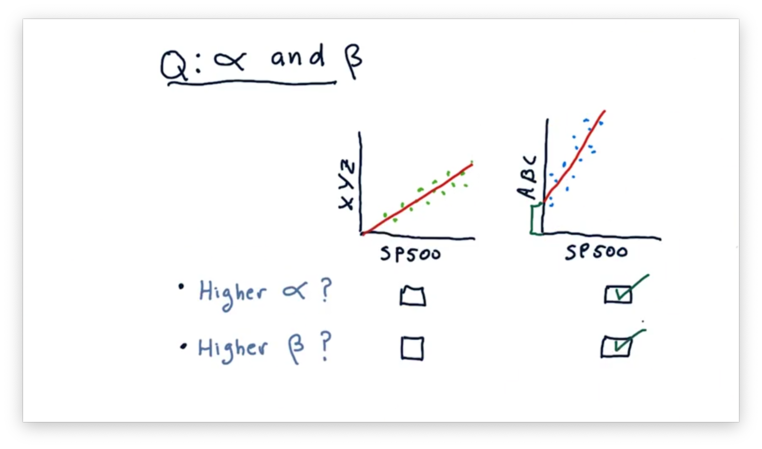 You may have heard about the debate between passive investing versus active investing. Passive investing advises investors to buy an index portfolio - for example, an ETF like SPY that tracks the S&P 500 - and hold it and let it grow. Active investing, on the other hand, is all about picking individual stocks.

Let's consider active and passive investing with regard to the CAPM equation, listed below.

Both active managers and passive managers agree with the first part of this equation; in other words, they agree that how a stock moves each day is most significantly influenced by the market, and the amount that it moves can be captured by β.

However, they disagree concerning the treatment of the α factor. Remember that CAPM says two essential things about α: it's random, and it's expected value is zero. Passive investors agree with CAPM.

Active managers, on the other hand, believe that α is neither random nor centered around zero. They think that they can examine stocks and predict which are going to rise or fall relative to the market. They might not be exactly right on every single pick, but they believe that, on average, they are better than random and better than zero.

If you believe what active managers say, you might consider leveraging historical information as well as machine learning to find stocks that have a positive or negative α. From there, you might be able to select a basket of stocks that can outperform the market.

If you believe CAPM, then you should be a passive investor.

Suppose now that instead of looking at just one stock, we want to consider an entire portfolio. Recall that for a particular stock, i, it's return, ri​(t), on an particular day, t, is equal to

We can calculate the β for the overall portfolio, βp​, as the weighted sum of the individual β values for each stock.

We can simplify the equation for rp​(t) by plugging in βp​.

Notice that we also have an αp​(t) term, which is ostensibly derived as a weighted sum of the individual αi​(t) terms. However, since CAPM tells us that the expected value of α is zero, we don't need to compute αp​ directly; instead, we can estimate it.

An active portfolio manager doesn't believe that α is a random variable centered at zero. As a result, they incorporate the weighted sum of individual stock α values into the rp​(t) calculation.

If we are in an upward market, do we want a portfolio with a larger βp​ or a smaller βp​? How about if we are in a downward market? 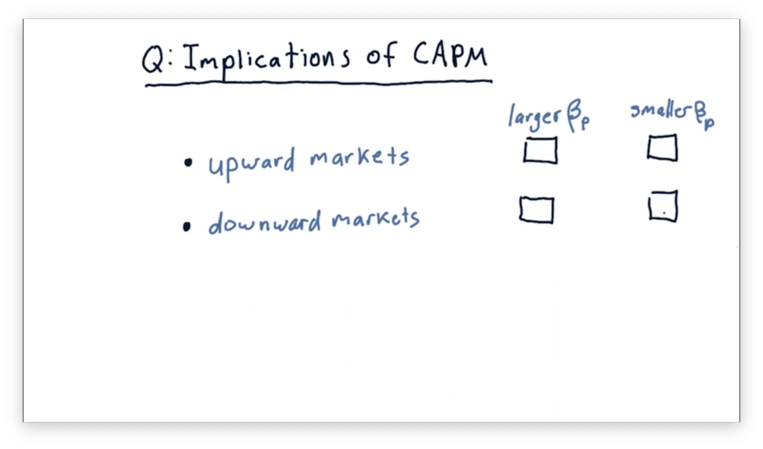 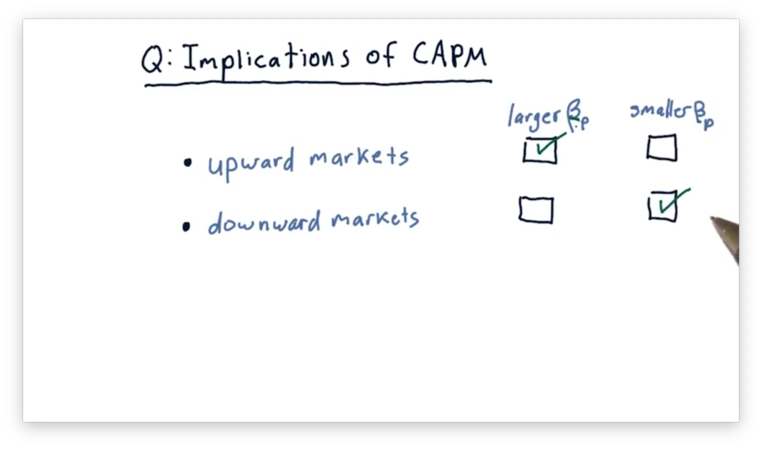 Remember that CAPM dictates that the return of a portfolio, rp​(t) depends on three things: the βp​ and αp​(t) of the portfolio, and the market return, rm​(t).

The first point to remember is that CAPM says that α is a random variable with an expected value of zero. This assertion excludes smart α selection from our toolbox of ways to make money.

Unfortunately, the efficient markets hypothesis - which we are going to cover soon - essentially says that you can't predict the market. As a result, the strategy of switching into portfolios with optimal β values based on expected market performance falls flat.

If we believe CAPM, then we must concede that we cannot beat the market. Professor Balch does not believe CAPM.

The classical value of β relates the performance of a stock to the performance of the entire stock market. However, researchers realized that, since a particular stock might have exposure to multiple sectors of the market, perhaps it ought to have a β value relating its performance to that of each sector. This is known as arbitrage pricing theory (APT).

For example, a particular stock, i, might have exposure to the financial sector, F, so we could compute the component of return for i due to F as the product of βiF​ and the return rF​ for F for that day.

We can continue this process, computing an individual β for each sector that impacts the stock. By breaking out the overall β into these sector components, we can get a more accurate forecast of returns.